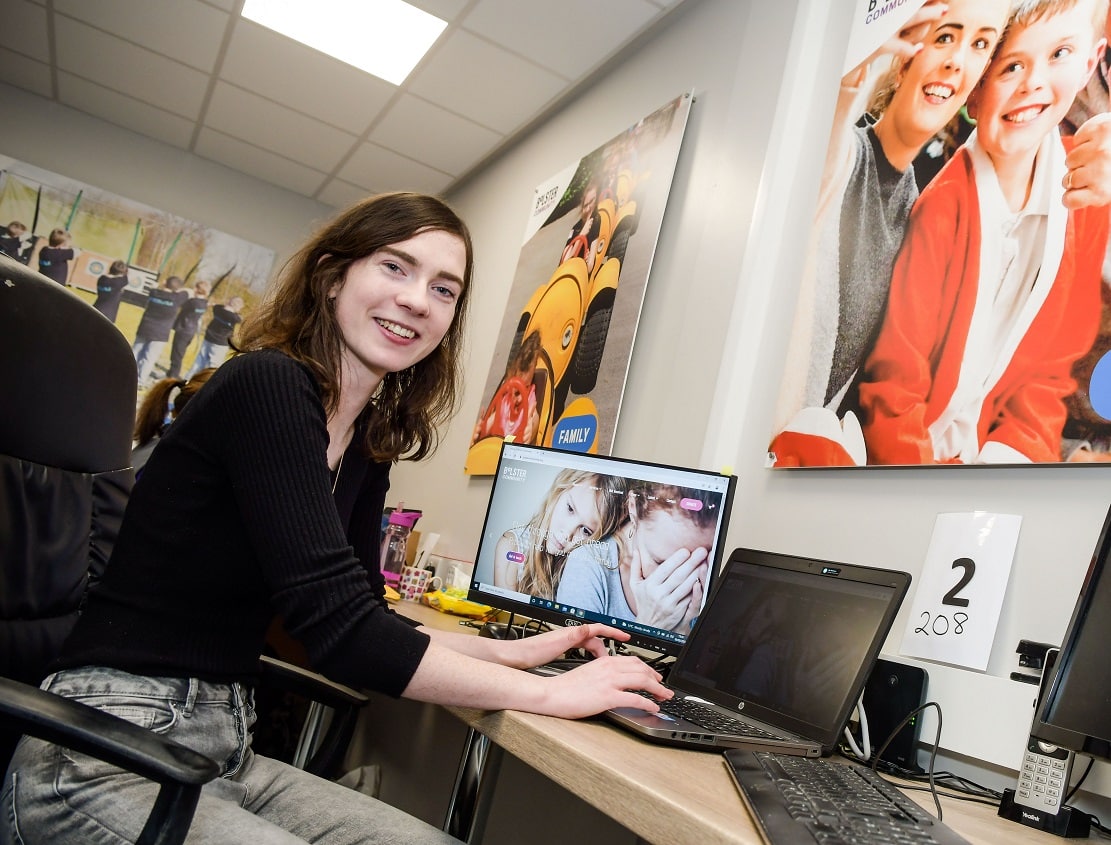 A Newry woman who has been plagued by Crohn’s disease has revealed how a new graduate employment scheme has helped to kick-start her career.

Sarah Fox (23) said the chronic health condition she has had since her teens left her unsure of her career prospects and worried that her employers might not understand.

“With Crohn’s disease, you have constant ups and downs, you can never figure out when you are going to have a good day or a bad day,” she said.

For Sarah, finding a way to live a full life whilst dealing with her illness was something she aspired to following her time in university.

Sarah was diagnosed with Crohn’s Disease in 2015 when she was 16 and doing her A levels.

“I was very sick for a long time and in a lot of pain. It was a really difficult time,” she said.

According to the NHS, Crohn’s Disease is a chronic condition where parts of the digestive system become inflamed. It can affect people of all ages, but symptoms, including stomach ache, tiredness, and weight loss, typically appear in childhood or early adulthood.

People suffering from Crohn’s can experience flare-ups and need regular check-ups which can be disruptive in terms of school, work and social life.

However, with the help of supportive teachers, Sarah managed to keep up with her studies and succeeded in starting a degree in Anthropology and English at Queen’s University Belfast.

Many people with Crohn’s Disease say fatigue is the most difficult symptom to deal with and that has been the case with Sarah as well.

Another dominant symptom for her is arthritis, causing her to feel like “an old woman” at times.

One day, overwhelmed and unsure about her life after graduation, Sarah was scrolling her Facebook newsfeed when information about a new placement programme popped up.

The UK  charity Leonard Cheshire was reaching out to talented graduates with disabilities to place them with Northern Ireland’s leading companies in paid internships.

“I think most graduates feel overwhelmed about the future but if you have a disability, you would feel it even more because you are concerned – who’s going to hire me,” she explained.

Following an easy online application process, Sarah was surprised by how quickly she was offered a place – with Bolster Community, a charity and social enterprise with offices in Newry and Kilkeel.

“I was really, really happy because it was in my home town and I would not have to travel,” said Sarah, who grew up in Newry.

Sarah found Bolster Community’s team very friendly. She said: “The Leonard Cheshire programme was a good transition for me because between being diagnosed and finding your normal life, you have to find a way to do that.

“And Leonard Cheshire was really important in that way. I cannot imagine I could have been in a better place if I had not come across this opportunity.”

Leonard Cheshire launched the GradEmployNI, in partnership with the Ulster University Business School, to help turn the tide of poor unemployment rates for graduates with disabilities in Northern Ireland.

To those HR managers wary of hiring somebody with a disability or health condition, Sarah would advise them not to write people off for that reason.

“Even if they have a disability, they are still capable, they just might need adjustments. If a person has no experience because they were held back by their disability, look at their character, their work ethic. Give them a chance,” she said.

Sarah has also urged fellow graduates not to feel uncomfortable about disclosing or discussing their disability openly.

“Do not be bothered by the term disability,” she said.

“For me, it would have put me off; I do not like saying I have a disability because that does not seem like something that should highlight you as a person. But in reality, you do have to take your condition into account.

“So, do not be put off by that word, do apply, focus on building your skills and enjoy your programme. Take your chance.”