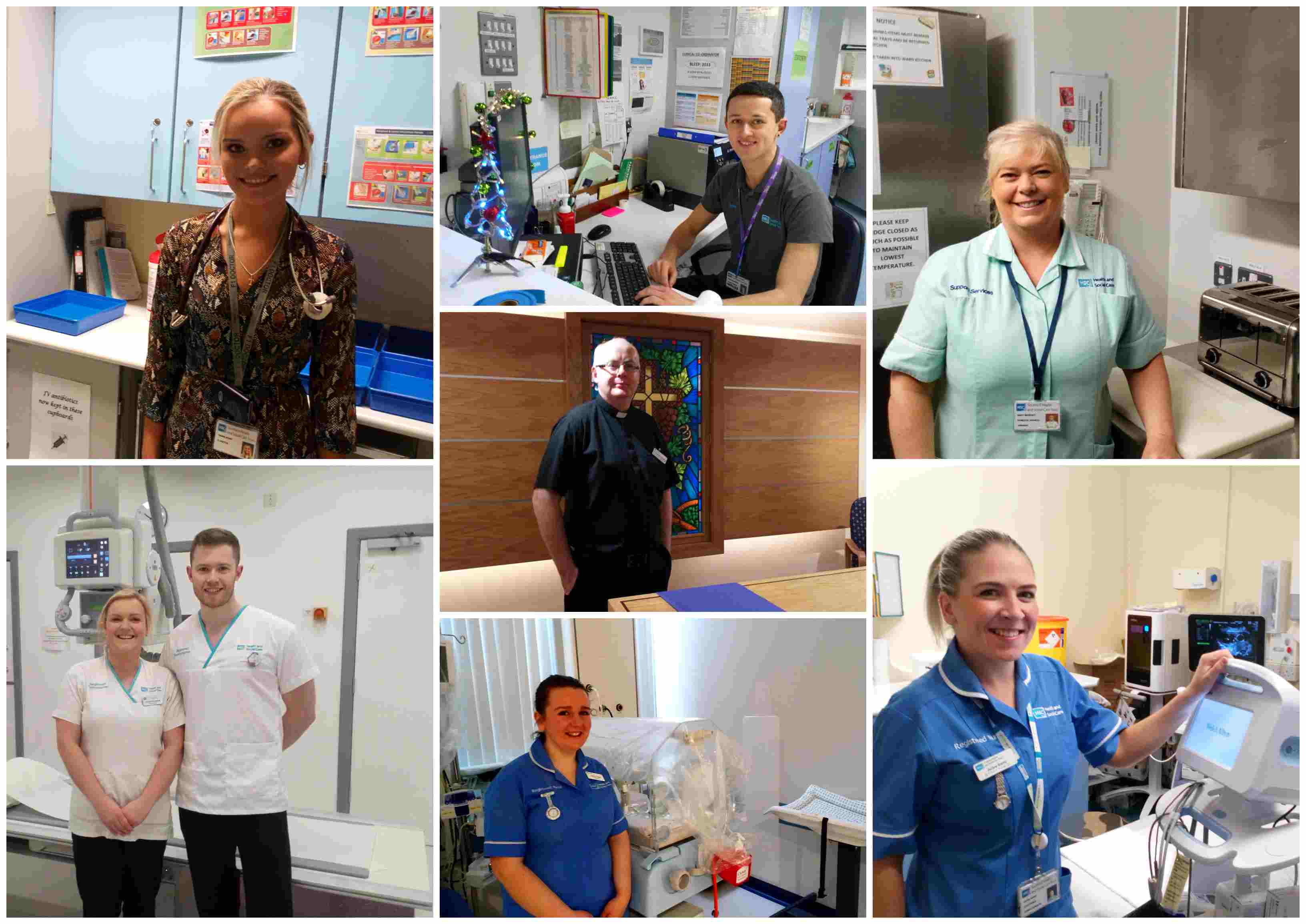 The show must go on. While most of you are tucking into turkey and enjoying a tipple, there are many hard at work on Christmas Day.

We caught up with members of staff at Daisy Hill Hospital in Newry, who will all be dedicating their Christmas Day to others.

And unlike a lot of professions, there is no such thing as a guaranteed day off, especially in the health sector, so let’s hear it for the health service and their 365-day-a-year care.

Radiographers Ryan Boyle and Caroline Bradshaw are both working on Christmas day this year.

Their department is operating a skeleton staff with Caroline working the 5-9pm shift and Ryan from 1-5pm.

This will be Ryan’s – who has been working at Daisy Hill for four or five-years – second Christmas Day working in the hospital.

“It is usually busy enough, especially A & E, but you have to remember that the injury would have to be very serious or else people would not come in as they would rather be at home,” he said.

When asked what he will miss most about working during the holiday, Ryan confirmed it was the dinner.

“I have told them to keep me a plate, but I don’t know if there will be much left when I get back to the house”, he laughed.

For Caroline, it will be her first experience of Christmas at the coalface.

She said: “There is a really good community feel in the hospital at the moment.

“No one wants to be in here on Christmas Day, including the patients, so it is so important to keep everyone positive and in a good mood.

“The best thing is there are sweets everywhere as they are brought in by patients, it really is a nice atmosphere to be in”, added Caroline.

Both added that Boxing Day was the busier over the period, with Ryan saying: “A lot of people put stuff off and would come in the next day instead of Christmas.”

At the Special Care Baby Unit, Laura Tate will be spending her first Christmas as a married woman on the ward.

“It is going to be hard,” she admitted. “Although I feel like I will be making a difference, nobody wants their baby’s first Christmas to be spent in a hospital.

“We try to facilitate time and space for families to spend that first Christmas together in the unit.”

She added that she was also expecting a little one next year and was looking forward to time off over the festive period next time around while she enjoys maternity leave.

Laura stated that she had previously worked Christmas in the A & E department, which she said, would likely be very busy.

She said the other positive was the arrival of presents from Santa, helped by donations made to Tiny Life.

When asked what she wanted for Christmas, Laura knew exactly what. “A Michael Kors handbag,” she announced emphatically, and added that her husband knew which one.

Mary McKevitt, a domestic assistant on the Maternity Ward, will also be hard at work this Christmas.

She said: “I offer to do it, I know how important it is to spend the time with your kids in the morning and mine are all grown up now.

“I am working 7am until 2pm; my husband, he will have to get the dinner started for me coming home.

“It is really lovely working on this ward on Christmas, you can see the children all excited for Santa coming.”

She added: “It can be really exciting being around all this new life as the Christmas babies are born.

“I volunteer as I know how hard it can be, especially for those with young children, you want to be there for when the wee ones open up their presents.”

When asked if she had any last-minute shopping to do Mary said: “No, I am all sorted wrapped, delivered and can’t be annoyed with all the running”.

Mark McLoughlin will be hard at work as a clerk on the Male Surgical Ward of the hospital.

For him, this will be a totally new experience as it will be first Christmas at work.

He had been asked to do so due to shortages in the department after originally being granted leave.

Mark stated: “My dinner will be ready for me when I get home, I finish at 12, and my mum and partner are cooking this year.”

He added: “I normally go to my granny’s on Christmas morning but unfortunately she passed away last month, so it is a big tradition gone and it would have been hard regardless.”

Mark stated that he would be back working on Boxing Day, but was looking forward to some well-earned rest on New Year’s Day.

When asked what he wanted for Christmas, Mark said he just wanted surprises, making him a hard man to buy for.

For Jackie Barry, a nurse on the Female Surgical Ward, a hospital is a common sight for Christmas Day.

She stated: “This is my 18th Christmas Day working from the age of 16.

“Some of my other sisters work in care too, so we have always accepted that we would be working.

What about the presents…… Jackie had a quick and cunning response: “We open ours on Christmas Eve”.

She added: “Then we will all to get together for a family meal at some point after the Christmas holidays, we are all on the same boat and can’t get the same shifts”, she added.

Speaking about the ward Jackie said: “There is a lovely atmosphere, I used to work in a nursing home and some people don’t have a family to spend the day with.

“We just have to make the best of a bad situation, this is improved by playing music and wearing our flashing pins.”

When asked what she wanted for Christmas, Jackie said: “I don’t really know, I have asked the ward sister to make me a mint Aero cheesecake I would be happy with that.”

She stated that the staff would make a “fry-up” in the canteen on Christmas morning but quickly commented: “I can’t cook, but I do the dishes”.

Jackie said she would be joining one of her sisters for Christmas dinner after her shift.

“I don’t like turkey, so I am having beef, also not a big fan of vegetables but I have been promised onion rings, which I am happy about”.

It will be a first for F1 Doctor Tiarna Byrne who will be working on the Male Medical Ward this Christmas.

Unlike the others, she will be working full hours on Christmas Day, which will be a 9am to 9pm shift.

Tiarna stated: “We usually have a big Christmas with the whole family, but they will all be away by the time I get home.

“We have decided that we are going to do presents and have exactly the same dinner again on Boxing Day.”

“This is kind of what I signed up for, being in my first year it is no surprise I have drawn the short straw, but at least it means that I can really be making a difference this Christmas.”

Another group hard at work this Christmas will be the members of the Hospital Chaplain.

This is available 24/7 on 365 days a year at the Daisy Hill Hospital for those who are members of the Roman Catholic, Methodist, Church of Ireland or Presbyterian faiths.

These all come together on as they commence their annual carol service around the wards.

Father Damien Quigley stated: “We have an 8.15pm mass on Christmas Eve and then I will go around in the morning giving communion to anyone that wants it.

“It is our duty to connect people to their home community we try to act as a bridge for those who are unable to leave the hospital.”

Father Quigley said that he would be on call for the whole day but was looking forward to dinner with his parents and more importantly the dog.