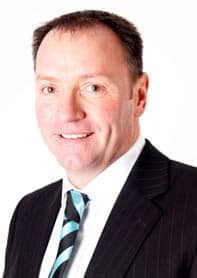 SINN Fein Councillor Mickey Ruane has been selected to serve as the new Mayor of Newry and Mourne District Council.
At a meeting tonight (Monday), the Warrenpoint native and councillor of 12 years took on the chain of office, and he will serve alongside Fews area Ulster Unionist Councillor David Taylor as Deputy Mayor.
The new Mayor (pictured) has pledged to work for all of the people of the district – which covers much of South Armagh – at a time which sees great changes for local government.
“Local government is in a state of transition,” he said. “Our own council of Newry and Mourne will soon embark on an historic merger with Down District Council.  I wish to use my position as Mayor to aid this process and to make this transition as smooth as possible.”
Councillor Ruane added that he is looking forward to working with his Deputy Mayor  David Taylor;
“I am looking forward to working with David over the course of the year,” he added. ” I know that together we will provide a good service for the people of Newry and Mourne.”
Mayor Ruane has committed to making some positive changes during his year of office saying,
“I know things are tight for people at present and there isn’t a family in the area which hasn’t been affected by unemployment or emigration, but there are some fantastic things in the pipeline for Newry and Mourne,” he stated.
“The new Geo Tourism initiative between The Mournes, The Ring of Gullion and The Cooleys, award-winning Slieve Gullion Forest and Playpark and the new leisure complex in Newry are just some initiatives that I will enjoy working on during my tenure as Mayor.”