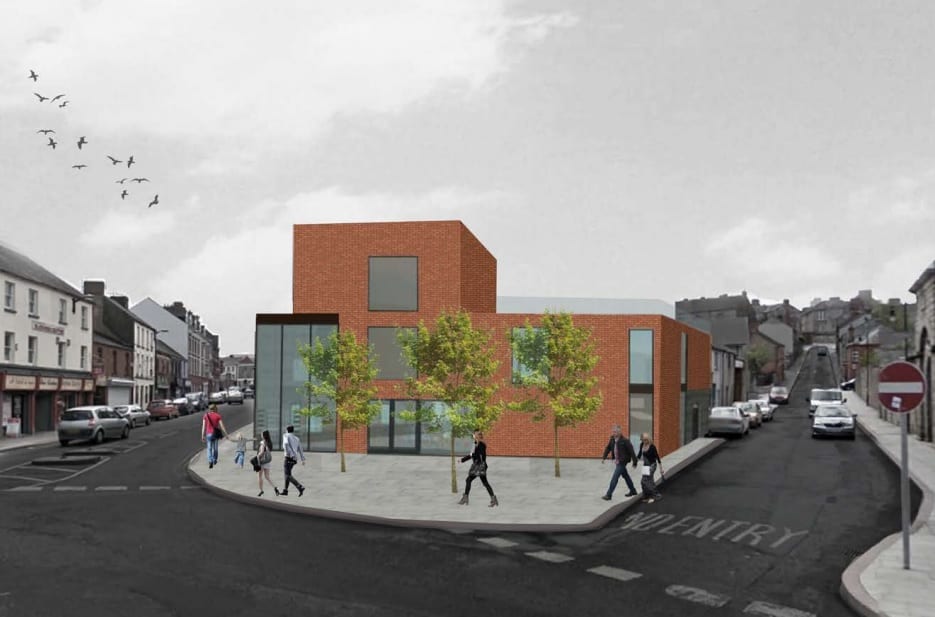 Armagh’s new £1.5 million Irish Culture Centre has been granted full planning approval – a year after the proposal was first lodged.

Two applications were submitted with the Department of Environment Planning Service for the ‘Cultúrlann’ – or Irish language centre – at Lower English Street last July.

Revised plans would later be submitted.

It will see the old fire station being demolished and a new three-storey state-of-the-art centre being constructed in two phases.

And as Armagh I exclusively revealed in February, Culture Minister Carál Ní Chuilín, in response to a question from Newry and Armagh MLA Cathal Boylan, said she remained committed to the project.

She said it was important outstanding issues were resolved so that construction work can begin.

Those issues have now been resolved.

The applications, having passed from the DoE to Armagh City, Banbridge and Craigavon Borough Council, have now been determined.

And it will be presented to the council’s planning and regulatory services committee, sitting in Banbridge this Wednesday, July 8, with permission given to proceed to build. In December 2013, Armagh I first reported that a planning application for the development – which would sustain 12 jobs and create a further six – was due to be lodged.

Directors of the collaborative, social enterprise known as ‘Aonach Mhacha’ – the assembly of Macha – had commissioned da architects and Smyth Surveying to draw up ambitious design plans for the proposed development.

These were unveiled before an invited audience of business leaders, political representatives, cultural activists and students from Coláiste Chaitríona, Armagh’s only Irish medium secondary school.

Now planning official Miriam Clarke, in her report on the application, records that the council “has taken into consideration all other material matters, including matters raised in response to consultation and publicity. Any material harm that the development would otherwise give rise to could be offset by the conditions imposed”.

These conditions state: commencement of development within five years; Windows or doors shall not open out over the public road or footway. Steps, pillars, access ramps, down spouts etc. shall not project out into the public road or footway; The opening hours of the business shall be restricted to 9am to 11pm; Programme of archaeological work to be submitted and approved prior to commencement; Access to be afforded to any archaeologist nominated by NIEA at any reasonable time; and no external roof or wall mounted plant, aerials or communications dishes are permitted. No external grilles, service outlets, rainwater pipes, etc. are permitted, except as indicated on the approved drawings. The main function of the proposed building was to act as a venue for cultural exchange and to attract the general public passing by.

The ground floor will include a cafe, kitchen and server, two teaching rooms, a multi-purpose room, a reception, two stores, a technical room, toilets and a room for bin storage.

Access to the two floors above will be provided via both life and and stairs.

Four offices will be located at first floor, again with toilets, and a plant room.

An artist studio will be situated on the third storey level, complete with a roof terrace. There will also be another two offices and a store.

The outside of the new building will be finished in red brick, with some elements of Armagh stone and these finishes reflected those used in other buildings in the immediate area of the site.

There were no objections from the public lodged to the plans, and any concerns held by statutory agencies were addressed by way of the conditions imposed.

Aonach Mhacha Director, Áinín Ní Eachaidh, when the plans were first revealed, outlined the scale of the project, saying: “Aonach Mhacha is a collaborative social enterprise which will build and manage a cultural centre in the historic heart of Armagh City.  The new cultúrlann will act as a beacon for those with an interest in the Irish language and Irish cultural heritage.

“Aonach Mhacha will provide opportunities for social interaction as well as structured learning and engagement with the language and the broader culture.

“Café, conference and classroom space will be supplemented with a media suite and office space for well-established and new Irish language and cultural enterprises.