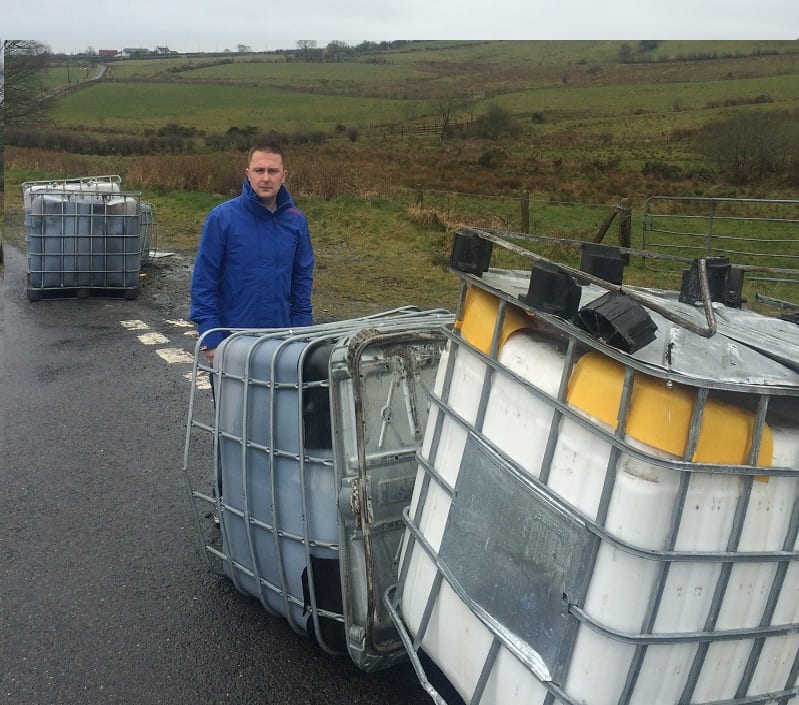 There have been repeated calls for more robust action to deal with those responsible in illegal fuel laundering and the indiscriminate dumping of toxic waste.

It comes after the latest incident in south Armagh, which happened just outside Newtownhamilton.

Ulster Unionist MLA Danny Kennedy said he was “sickened and angry” at the dumping, which was discovered at the junction of Cumson’s Road and Tullygeasy Road.

He said: “I am calling again for more robust action to be taken by the security forces and Customs & Excise authorities to address the ongoing and apparently endless problem of the dumping of illicit fuel in South Armagh.

“It is deeply depressing and downright unacceptable that incidents of this nature continue to occur in South Armagh without let or hindrance.

“Given where this toxic waste has been dumped once again, these incidents appear deliberately designed to put enormous pressure on the minority Protestant community in South Armagh.

“We need to see a meaningful and effective response to support law abiding communities and urgent action is required to apprehend the individuals responsible and put them where they belong – behind bars.

“There is ongoing environmental damage being caused by these incidents and once again the clean up will have to be funded by the hard pressed tax-payer.”

He said: “There is despair and palpable anger within the local community at this latest incident.  This problem is now of epidemic proportion within the South Armagh area and the locations chosen by those individuals carrying out this crime, who I have no doubt have clear links to Republican paramilitary elements, are very sinister indeed. “The incident in question at Cumsons Road saw the perpetrators of this crime visit the scene twice overnight to dump the fuel pods highlighting their clear disregard for those living nearby or indeed to the lawful authorities.

“As I have stated previously there is a clear desire for a co-ordinated effort to be initiated between all the relevant legal agencies to stamp out this illegal activity.

“The only way this form of criminal activity will be eradicated is through the full force of the law being prescribed against those individuals committing such crime and I call for immediate action to be taken by the PSNI and HMRC to ensure that necessary resources are provided in the South Armagh area to stop these sickening acts once and for all.”

Sinn Féin MLA Megan Fearon described the dumping of five tonnes of toxic waste in Newtownhamilton as “disgraceful” and said it was “an attack on the community”.

The Newry Armagh MLA said: “This is an absolutely disgraceful attack on the community

“These dumpers have no regard for this area or its people. Their only concern is lining their own pockets, regardless of what the cost is to our health, to the economy or environment.

“Thankfully, the Environment Agency was able to remove this poison before it caused any damage.

“The people responsible will continue to pollute the countryside as long as they can get away with it.

“So I would encourage everyone to work with the Environment Agency and the PSNI so we can remove this scourge from our society.”

“In the past week we’ve had an SDLP minister cut 100% of the funding to the Ring of Gullion and a UUP minister tell us there’s no money to repair roads in south Armagh,” he said.

“The people of this area have enough to overcome, in terms of attracting tourism and investment, without thugs further blighting the countryside.

“The people committing these acts are a tiny minority, many of them not even from the area. I’d encourage people not to let the actions of a few blight the good name of south Armagh.”