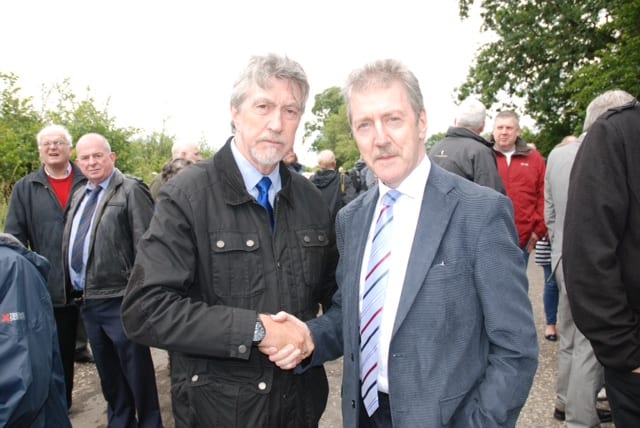 Chief Constable George Hamilton has been asked to ensure the return of instruments seized for forensic investigation the night of the Miami Showband Massacre 40 years ago.

Survivors of the attack on July 31, 1975, returned on Sunday for a service and to lay floral tributes at the spot at Buskhill, near Newry, where three members of the band lost their lives.

The band had been returning from Dublin when they were stopped at a bogus checkpoint. Mickey Brady with Des Lee who survived the massacre

And today (Tuesday), he revealed he had written to the Chief Constable George Hamilton requesting musical instruments taken by forensics on the night of the Miami Showband Massacre be returned to the survivors.

He requested information on the instruments after speaking to a number of survivors at Sunday’s poignant event.

“In all that time the survivors have quietly lived with the memories of that night and the nightmare of reliving the horrendous attack,” said Mr Brady.

“I am told by the survivors that the instruments that were in their vehicle on that night were kept by forensic teams and to this day they have never had these returned. Obviously these personal items hold great sentimental value to the survivors and their families.

“As such I have written to the Chief Constable asking for information on the whereabouts or status of the instruments.”

Appeal over silver hatchback occupants seen in area of burglary