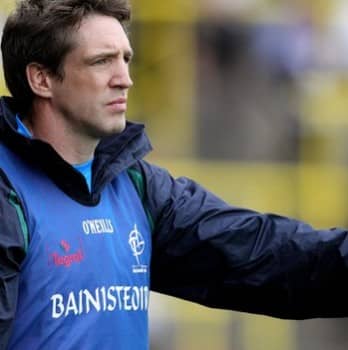 Kieran McGeeney is expected to be appointed as the new Co Armagh GAA boss tonight (Wednesday).

‘Geezer’, who captained Armagh to All-Ireland glory in 2002, has been widely tipped to replace Paul Grimley, who stepped aside earlier this month.

The Armagh County Board will meet this evening and it is expected that McGeeney will be appointed on a three year term.

Paul Grimley brought McGeeney back into the Armagh set-up after he had spent six years at the helm in Kildare.

And the two have worked brilliantly together and created a solid foundation for the future of local football.

Despite being relegated in April to Division 3 of the Football League, Armagh went on to reach the Ulster semi-finals before victories in the qualifiers against Tyrone, Meath and Roscommon.

Grimley made the decision to step down after two years managing Armagh when the Orchard County were narrowly beaten in the All-Ireland quarter-finals by Donegal.

McGeeney returned to the Armagh fold last October and his appointment would be widely welcomed.