Up to 150 jobs could be created throughout the building work and when up and running, with as many as 70 full and part-time positions cwhen complete 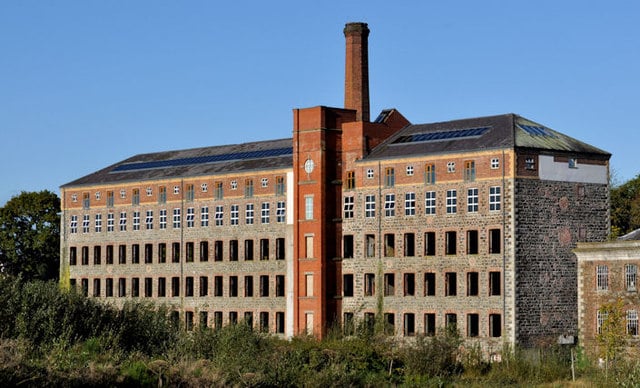 The derelict Gilford Mill could be transformed into a multi-million pound mixed-use development including apartments, restaurant and a garden centre.

An application for the scheme has now been submitted to Armagh City, Banbridge and Craigavon Borough Council for consideration.

A pre-application notice, providing details of proposals, had been made earlier this year.

Now a formal bid for approval has been sought for the historic mill, which stretches to six storeys in height and has previously been subject to proposals to restore and re-open for a variety of uses since its closure in 1986.

This application has been lodged in the name of mill owner, Karl Asset Management.

The proposals, if approved, are for the “conversion of and extension to vacant mill building to provide mixed use development”.

This would comprise a garden centre, restaurant, residential apartments, a rooftop garden and children’s activity area. The proposals also include servicing, storage, parking, access and landscaping along with associated ancillary general site works.
The development would boast a floorspace in excess of 60,000 sq ft – a significant increase from the current 37,000 sq ft.

The proposed layout plan shows 60,000 sq ft garden centre occupying the building, which includes an external covered area for selling plants and an ancillary restaurant/café on the first floor.

There would be a total of 28 apartments on the upper floors.

The submitted plans also include 34 parking spaces for residents and 269 spaces for customers.

Access remains from Dunbarton Street, where a right turn lane is proposed, as per previous approval.
According to the pre-application consultation, while the plans include only a garden centre in commercial terms at this stage, there is the “opportunity for further retail uses on the site in future phases”.

And it adds: “This the first phase of the development and the applicant is currently working on a full masterplan for the entire site including the mill pond.

“We will hold a further pre-application community consultation process for the masterplan proposals and suggestions will be taken on board during that process.”

According to the submission to council the owners feel there is a real need for the development.

It states: “The site was acquired by Karl Asset Management in March 2016 who have surveyed all buildings and carried out urgent repairs.

“Karl Groups is a multi–disciplinary property company with over 50 years’ experience in property development,  construction, electrical and mechanical contracting, and facility management.

“The group is keen to be involved in regeneration projects with some notable developments including The Weaving Works and Obel Belfast.

“The proposed planning application involves the conversion and extension of the vacant mill building to provide a mixed–use development.”

The initial proposals for apartments and garden centre and restaurant are due to be publicly advertised this week with a decision expected in due course.