Man arrested after £17,000 worth of drugs seized in Co Armagh house search

Search was executed after anonymous tip from public 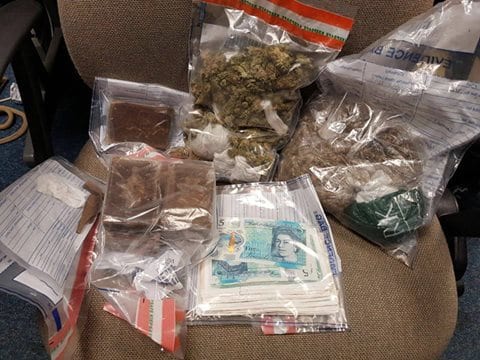 A man has been arrested after £17,000 worth of drugs were seized during a house search in county Armagh.

Police in Lurgan were tipped off by a member of the public who alerted them to a dealer in the area.

Following the anonymous tip, police executed a warrant to search the property, where they seized a large quantity of cannabis and cannabis resin.

A large amount of currency was also uncovered during the search.

Earlier this evening, police took to social media to highlight the uses of anonymous calls and help from members of the public.

Posting on Facebook, a spokesperson for PSNI Craigavon, said: “Detective H has had the unfortunate duty of dealing with several drug related sudden deaths since Christmas. It’s really got to her.

“The frustration at how people throw their lives away is surpassed only by the anger at the dealers who callously deal death on our streets, lining their own pockets and sending criminal cash up the chain to bigger, uglier, even more dangerous thugs.

“That’s why Detective H LOVES taking down a dealer. A while back, a member of the public stepped forward and told us about a suspected dealer.

“Because of how information is handled, Detective H doesn’t know who came forward, nor will she ever. Still, she jumped at the chance to take a dealer down.

“The information was researched, the warrant was written up, signed, and a search team was put together. This wasn’t any old search team; this was the ABC DST! They briefed, kitted up, then have that “special knock”!

“Here’s the result (pictured above)! This little lot has been estimated to have a street value of £17,000!

“A male was arrested at the scene.”

THe post added: “Well done to DST, Detective H and her team in Lurgan ROC (CID) and the person who spoke up. Keep talking to us, and we’ll keep putting doors up the hallway.”