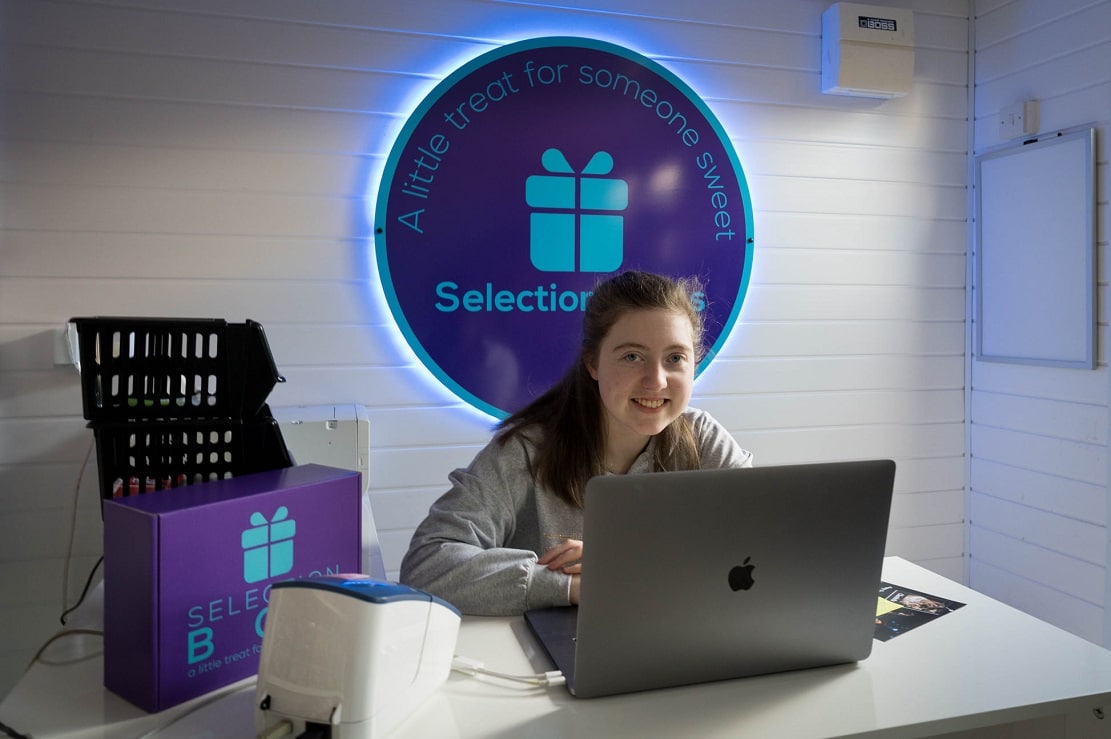 Teenagers, just like many of us, have found themselves with a lot of time on their hands over the last year due to the pandemic.

But one enterprising young Lurgan student has taken social media by storm by setting up a burgeoning business selling personalised selection boxes.

Alisha Thompson began trading with the simple to remember name of Selection Boxes in November but has already amassed over 2,500 followers on her social media account.

Delivered in distinctive purple and blue boxes, each is specifically designed for the recipient in mind, including photographs and a message from the sender.

Speaking to Armagh I, the 17-year-old A-level student revealed that a big part of her success was the “personal touch” as she hand delivers many of the boxes herself.

“It’s great when you are walking up to houses and the children see you with their box,” she said. “They come running to the front door and you can see the excitement on their faces. It’s just great to make others smile.”

The business had its origins in this exact sentiment.

Alisha’s father Martin explained: “It all started with Alisha saying she wanted to do something to cheer people up at the start of the first lockdown.

“The idea was floated sort of around last March, and then it basically took about seven months to do the research and the design, the logo, and everything associated with the business.”

Martin, a photography and graphic design graduate, played his part in the design process with the first boxes arriving in mid-November.

He said: “At the start it was just a wee idea that was floated but, after a while, she found that she was serious about it and would love to make it her job.”

Initially, the business was targeted towards children but over time Alisha found that many of the older population also have a sweet tooth.

According to her, the operation has snowballed with people asking for a birthday, Easter, Valentines and any other landmark occasion to be celebrated by a personalised selection box.

Alisha is currently studying moving image arts, art and ICT at A-level, with her father also giving her crash courses  in graphic design.

He said: “Basically it is there so she can support herself through college, or whatever, or if the time comes that she thinks it can become a full business, but we will cross that bridge when we come to it.

“We’re trying to keep Alisha grounded, get her exams and get her qualifications behind her. As you probably know as I have told her, it will take somewhere between three to five years to build up a great business.”

A musician by trade, Martin even gave up his music studio to his daughter’s business but insists he is happy playing away in the kitchen.

From TikTok to Avengers to Disney Princesses, the personalised boxes have been posted throughout the country and as far as Scotland and Liverpool.

Proud dad Martin commented: “It has been amazing, the growth in just a few months. People are now just getting used to it and it is something that they really want.”