Loved-up ABC Council area ranks amongst highest for saying ‘I do’! 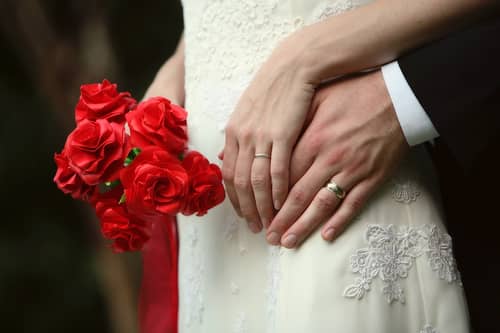 We’re a loved-up lot down this neck of the woods, as figures revealed today (Thursday) show that the new Armagh, Banbridge and Craigavon Council area had the third highest number of marriages of all 11 new ‘super-council’ areas last year.

Belfast was leading the field with 1352 of all 8126 registered marriages last year.

It was followed by Newry, Mourne and Down with 874 and then Armagh, Banbridge and Craigavon with 788.

That was just slightly ahead of North Down and Ards on 784.

North Down and Ards believe in waiting that wee bit longer to get hitched, with the groom’s average age of 35.6 and brides 33.1.

In Armagh too, over 43 per cent had been living at the same address before saying ‘I do’.

When it comes to wedding reception venues, people in Armagh, Banbridge and Craigavon appear to have chosen a wide range of venues, considering that the most popular – with 17 of the 788 weddings – being hosted in the Belmont Hotel in Banbridge.

The most popular venue for couples in the Newry, Mourne and Down area was the Slieve Donard Hotel in Newcastle, while in North Down and Arts it was The Old Inn in Crawfordsburn.

Belfast’s most popular wedding reception venue for those that got married last year was Belfast Castle.

While across the Province there was 8126 couples getting wed in 2013, there was a staggering 2,403 divorces.

And on this occasion the good folk of Armagh, Banbridge and Craigavon recorded the second highest number of couples ‘untying the knot’.

There were 822 divorces to couples living in Belfast, with 547 in Armagh, Banbridge and Craigavon and, considerably lower in Newry, Mourne and Down, with 316. The least number of divorces, at 216, was recorded in Fermanagh and Omagh.

Other key findings include:

• Brides and grooms were, on average, aged 31 and 34 years respectively in 2013, approximately 5 years older than was the case two decades previously.

• Some 14 per cent of brides and 6.8 per cent of grooms were aged under 25 years in 2013.  The comparable proportions a decade ago were 24 per cent and 12 per cent respectively.

• The number of marriages varied throughout the year, ranging from a low of 200 in January to a high of 1,305 in August.  Saturday 17th August 2013 and Saturday 28th September 2013 were jointly the most popular days to get married last year, with 93 couples getting married on each of these days.