Dreams come true for 12-year-old Keady schoolboy as he accompanies idol Des for a tune! 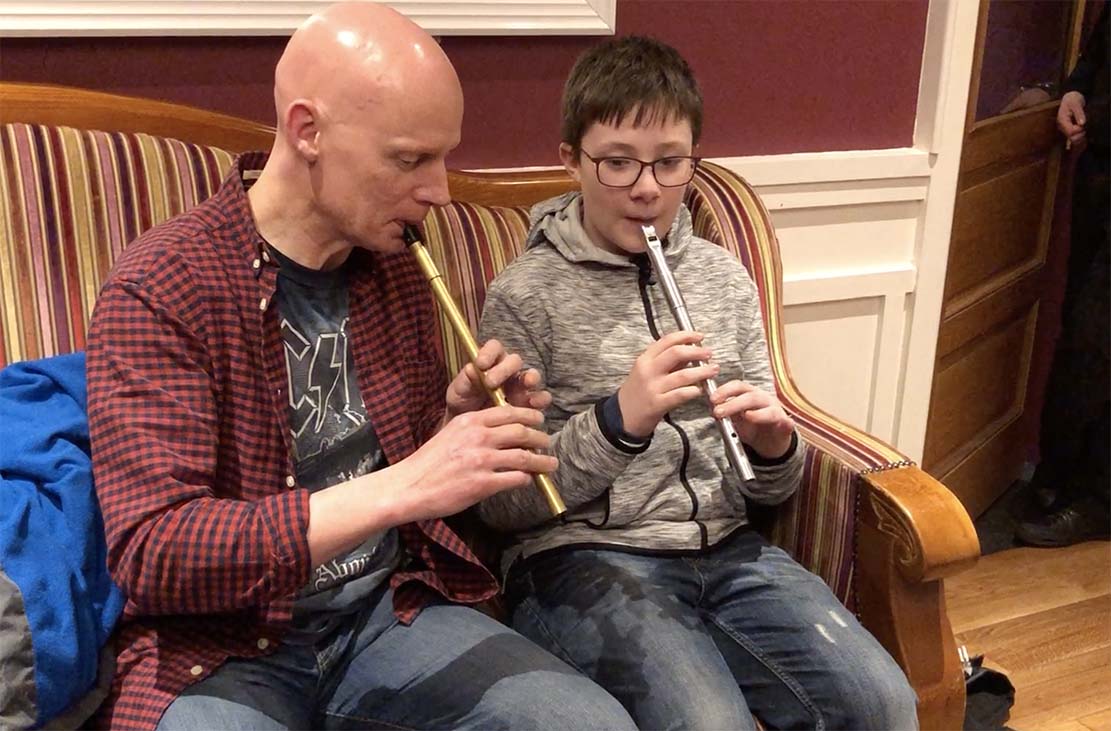 A 12-year-old Keady schoolboy has had his musical dream come true after playing alongside one of his heroes.

Des Cafferkey needs no introduction to fans of traditional music; he is widely recognised as one of the greatest flautists and tin whistle players of modern times.

And the Achill Island native was thrilled to join Liam Hughes for a haunting rendition of his very own ‘The Cradling Arms of Croaghan’.

It was an occasion too that will live long in the memory of the talented young Keady musician.

Liam’s dad Paul told Armagh I : “It was a very proud moment for both myself and Liam.

“Liam has been playing the whistle since he was five – when he saw Des fetching his whistle to play with him he said he felt excited.”

A student of Armagh Pipers Club, Liam puts endless hours into his practice and it is really paying off.

Recounting how the meeting and musical match-up came about, Paul added: “Last year at the Féile Na Tána festival in Carlingford, Liam heard Des playing his tune at the tutors’ recital concert.

“Liam was so inspired he went and learned it and vowed to try and play it the next time Des was at least within earshot.

“One year on at this year’s festival, during the after session in McKevitts’ Hotel in Carlingford, Liam got the opportunity to actually play with Des.

“To say it made his night would be an understatement.“

Also listening in – if you watch until the end – is that great Galwayman Máirtín O’Connor, the inspirational and award-winning button accordionist who has played with some of the greatest traditional artists of the day, from The Boys of the Lough to De Dannan.

Both Des and Máirtín began their musical journeys in their formative years and have risen to the top of their game.

It is clear in young Liam they recognise another musician with a touch of magic required to ascend that stairway to success and stardom!