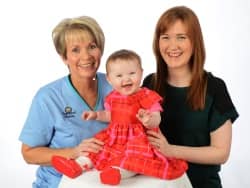 A local midwife, whose quick observation undoubtedly led to the diagnosis of a baby’s heart condition and saved her life, has won a top award in her field.

Eileen McConville, a local midwife from Collegelands, on the Armagh/Tyrone border, is employed by the Southern Trust and has landed the prestigious JOHNSON’S® Baby Mums’ Midwife of the Year Award 2014, part of the Royal College of Midwives (RCM) Annual Midwifery Awards, for Northern Ireland.

Nominated by proud mum Maria McGeary, Eileen delivered exceptional care and went that extra mile before, during and after the birth of Maria’s daughter Grainne in January 2013 in Craigavon Area Hospital.

During a check-up, Eileen McConville realised that newly-born Grainne didn’t have a good colour and it was because of this quick observation that Maria’s daughter’s heart condition was found.

Throughout the three weeks during Grainne’s heart operations, Eileen kept the McGeary family at ease by calming and comforting them throughout the difficult time – if it wasn’t for Eileen’s expertise and knowledge of the symptoms, Maria’s daughter would not be here today.

Midwife Eileen McConville, this year’s Northern Ireland winner, commented: “It is fantastic news that I have been nominated and won this award. It has been an absolute pleasure and privilege to support Maria during her pregnancy and birth. I really enjoy my job and hope to make a positive difference to each woman’s experience.”

Proud mum Maria explained: “We owe Eileen the world. If it wasn’t for her we would not have our daughter with us today and we are therefore forever in her debt. She gave her all to support me and I could not have got through it without the wonderful Eileen.”

Patricia McStay, Southern Trust Head of Midwifery, commented: “I am delighted that Eileen has won this prestigious UK award. It’s a tribute to the hard work and skill of our staff that we have won this award for the Northern Ireland region. I’d like to congratulate all those involved and to thank Maria for nominating us.”

The JOHNSON’S® Baby Midwife of the Year Award, part of The Royal College of Midwives (RCM) Annual Midwifery Awards, recognises the incredible work from outstanding midwives across the country. It is the only award which allows mums to nominate midwives who they feel provided exceptional support before, during and after the birth of their child.

During 2013, nominations were sent in from mums across the country, who felt their midwives deserved that extra bit of recognition. The entries were put through a rigorous judging process by a panel of senior RCM midwives and selected representatives from Johnson & Johnson, who looked at three critical aspects of the nomination. These aspects included to what extent the midwife demonstrated best clinical practice, support for mum’s emotional care and support for strengthening the bond between mum and baby.

The six regional winners will be awarded trophies at The RCM Annual Awards ceremony which will be held at top venue, The Brewery on Wednesday, January 22, 2014. Winners will be invited on stage to collect their awards from Professor Cathy Warwick CBE, Chief Executive of The RCM.

The event will be compered by TV newsreader and presenter Natasha Kaplinsky.

The overall national winner will also be announced as the JOHNSON’S® Baby Mums’ Midwife of the Year 2014.