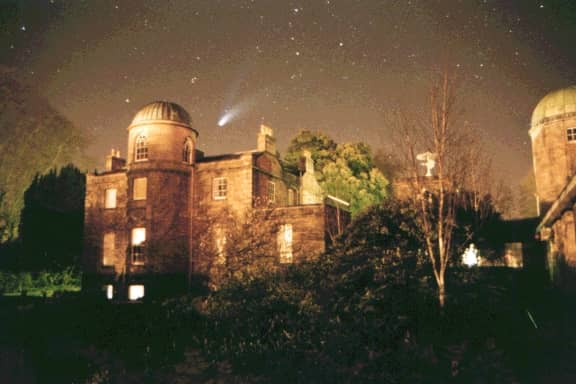 Several members of Armagh Observatory staff have been recognised internationally for their contributions to astronomy.

Two have been awarded membership of professional organisations.

Four others have been honoured by the International Astronomical Union (IAU), which has named four asteroids, or minor planets, after them in recognition of their work.

Research astronomer Stefano Bagnulo has been awarded the position of research associate of the Italian National Institute for Astrophysics for his research in planetary science carried out also with Italian collaborators.

Research Technician James Finnegan has been elevated to the grade of Senior Member of the USA-based Institute of Electrical and Electronic Engineers (IEEE).

Mark Bailey, Director of the Observatory, said: “The Armagh Observatory operates on the international stage and is the oldest scientific institution in Northern Ireland.

Stefano Bagnulo has specialist research interests in polarimetric techniques applied to magnetic stars and to small bodies, such as comets and asteroids, in the solar system.

John McFarland has made a major contribution to promoting astronomy at Armagh Observatory, and is well known for his knowledge of the Observatory’s history and for his biography of the Irish astronomer Kenneth Essex Edgeworth, who predicted the existence of large numbers of minor planets in the region of the solar system, just beyond Neptune, known as the Edgeworth-Kuiper belt.

Geert Barentsen, now at the University of Hertfordshire, has interests in the origin and evolution of young stars and in meteor astronomy. He has contributed to developing the field of radio meteor scatter observations and has organised astronomy camps for young meteor astronomers in Belgium.

Prakash Atreya came to Armagh from Nepal. He is a meteor astronomer and programming specialist now working for the Universities Space Research Association at the Arecibo Observatory, Puerto Rico, which is the largest single-dish radio telescope in the world. He has developed automated routines for video meteor analysis for many networks and has deployed meteor cameras for public outreach in his native Nepal.

All the recently named asteroids are relatively large objects with diameters in the approximate range five to 15 kilometres.

They orbit the Sun in the region known as the main asteroid belt, between Mars and Jupiter, with periods of revolution ranging between approximately three and five years and pose no immediate threat to Earth.

Picture: Comet Hale Bopp over the Armagh Observatory (for illustration purposes only): www.star.arm.ac.uk