Half of Halloween incidents across NI happened in southern area command 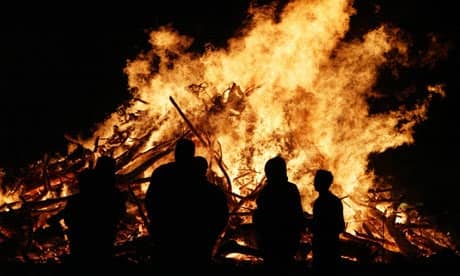 It was one of the quietest Halloween’s on record for the Northern Ireland Fire Servibut with 124 incidents attended across the country.

However, half of those incidents took place in the Southern area command which brings in the county Armagh area.

This is the lowest figure recorded for October  31 and represents a decrease of 7% on incidents attended during Halloween 2012.

The majority of the incidents this year were located in the Southern Command Area (50%) with most involving rubbish, bonfires and also a number of incidents where tyres were alight in the roadway.

In an isolated incident, Firefighters dealing with a fire involving a rubbish bin on the Scrogg Road in Kilkeel Co Down, were attacked by a number of youths throwing stones.

A side window in the Fire Appliance was broken but thankfully no personnel were injured in the attack.

Separate to Halloween related incidents, Fire Crews attended a fire in a building near the Milltown Road outside Benburb, Co Tyrone.

They extinguished the blaze in the building which was being used for industrial manufacturing of plastics. The cause of the fire was accidental.