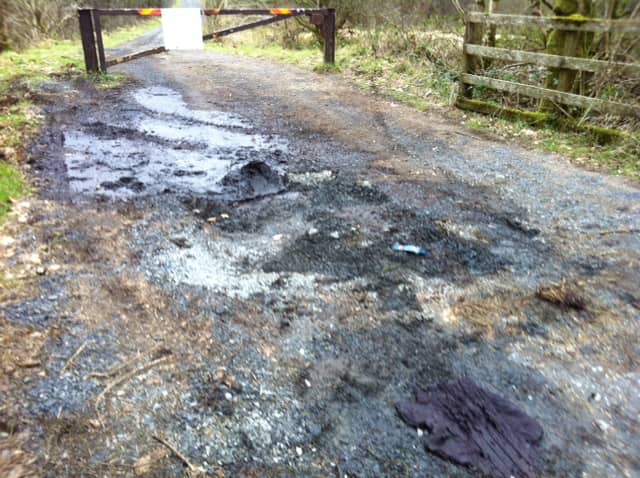 AN operation to clean-up the remains of fuel laundering dumping at Keady has failed to find favour with a local SDLP councillor.

Thomas O’Hanlon called for “greater oversight”, claiming contractors acting for the Northern Ireland Environment Agency had “left the job only half completed”.

He said: “Contractors were tasked to remove cubes dumped along the roadside at Carnagh on the Castleblaney Road and, whilst our primary focus must be on those dumping the waste in the first place, those tasked with clearing up the mess must do the job they’re paid to do.

“This week, I was contacted by local residents and some who walk in and around Carnagh Forest who were astonished at the state the place was left in by the contractors who were supposed to clear the fuel waste up.  When I visited the site, I was astonished at the amount of fuel waste and indeed metal left lying about from the fuel drum containers.

“I previously raised concerns about this process and have asked Armagh City and District Council officials to do so again.  It’s not good enough that this is the standard of work, especially in this location, which is close to a local water stream. The community of this area don’t want this type of waste dumped here in the first place but, when it is dumped, they expect it cleaned up.”

Meanwhile, Sinn Féin Councillor Terry Hearty has voiced his anger that the practice of dumping toxic waste in South Armagh is still continuing, after two more cubes of toxic sludge were abandoned on the Loughhaveeley Road in Glassdrummond.

“This is a very remote, rural road,” he said. “The cubes were dumped carelessly out of a van, spilling over the road and into a drain.

“From July 2012, at least 770 tonnes of toxic sludge has been removed from our roads and waterways at a cost of approximately £225,000 of taxpayer’s money.

“While 770 tonnes of sludge may have been cleared, we have no idea how much of this poison has seeped into the ground or made its way to waterways. These people seem intent on poisoning our beautiful countryside and doing as much environmental harm as they can.

“If anyone sees this sludge dumping going on or knows anything about it they should not hesitate to contact the Environmental Agency or the PSNI. We have a duty to protect the natural beauty of our area, our environment and the health and wellbeing of our children and families.”