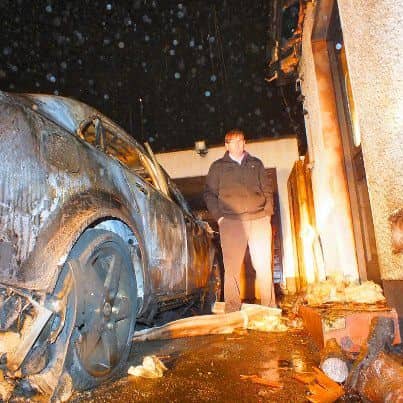 AN arson attack outside the home of a high-profile victims’ campaigner has been described by the man as “attempted murder”.

A car outside Willie Frazer’s  house on the Tandragee Road in Markethill, was torched in the early hours of this morning (Sunday).

A passing police patrol raised the alarm after seeing the fire at about 1.15am. They noticed smoke and worked to locate the source.

They alerted Mr Frazer and brought him to safety.

The Markethill man is a leading light in the recently-formed Ulster People’s Forum, a  group set up in the wake of the Union flag protests.

Police said the burning car was close to the house and Mr Frazer was sleeping when they raised the alarm. Officers also alerted his neighbours and drove a neighbour’s van away to ensure it did not catch alight.

The PSNI patrol called the fire service and then used hand held extinguishers and a garden hose to dampen the blaze and prevent it from spreading.

The car was completely destroyed in the fire but no-one was hurt. The side of Mr Frazer’s home was also damaged.

Mr Frazer said: “But for a fire-proof security door and the PSNI we as a family would have been burnt to death in our home tonight. The door stopped the flames but the roof started to go on fire.

“The very clock in the kitchen had started to melt and the smoke was building up inside the house.

“This was nothing but attempted murder. I was awoken by a passing PSNI patrol who spotted the flames. I will not submit to this intimidation.”

Sergeant Gwyn, of Armagh PSNI, said: “This was a very dangerous fire and, due to the quick thinking actions of officers out on patrol, no-one was hurt. The consequences, if we had not caught this fire in time, do not bear thinking about.”

Police have launched an investigation and conducted house-to-house enquiries, he said. Anyone who has any information has been urged to contact police at Armagh 0845 600 8000.

Mr Frazer is also a former director of the victims’ group, Families Acting for Innocent Relatives (FAIR), which is based in Markethill.

There has been cross-party condemnation of this morning’s attack.

“Everyone has the right to express their views in a democratic society and this attack appears to be an attempt to interfere with that democratic right,” he said.

Sinn Fein Newry and Armagh MP Conor Murphy said whoever was responsible was not representative of the vast majority of people in the constituency.

“Whatever’s people’s views are of Mr Frazer’s public statements or actions, there can be no justification for an attack like this on a family home,” he added.

SDLP MLA Dominic Bradley praised the efforts of quick-thinking police and said attacks of this nature had no place in a democracy.