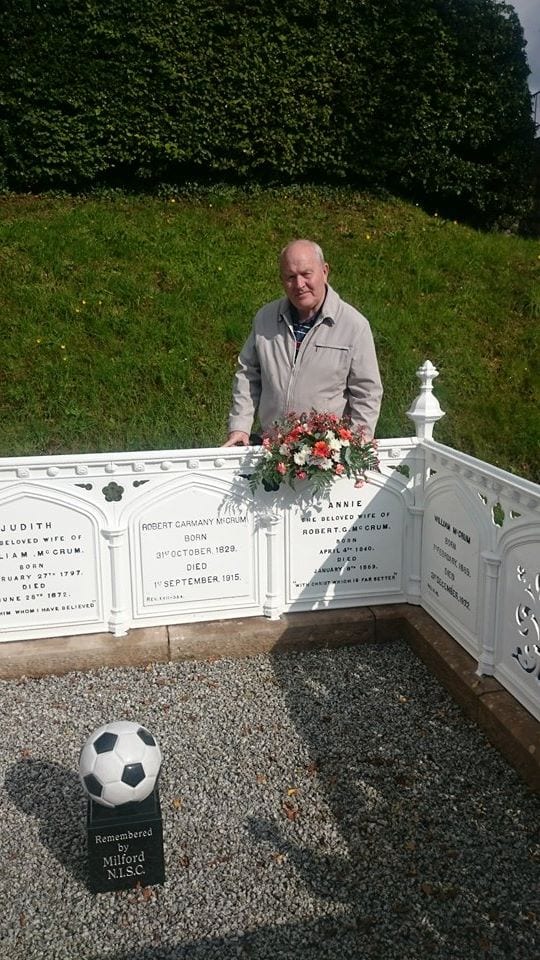 Flowers have been laid on the grave of Robert Garmany McCrum, the man who founded the village of Milford, to mark the 100th anniversary of his death. The grave was recently restored after a lengthy campaign, being as it is the resting place of RG McCrum’s son, William, credited with inventing the penalty kick.

Chairman of the Milford Community Development Association, Kevin Powell, is pictured at the grave laying the flowers on behalf of the people of the famous Co Armagh village.

Today, Tuesday, September 1, marks the 100th anniversary of the loss of a man who did so much for the area and whose name will always be synonymous with Milford.

RG McCrum took over his father’s mills in Milford in the 1850s, which later became one of the largest mills on the island of Ireland.

The linen was so spectacular and grand and of such a quality that it was sought out for use on the ill-fated Titanic!

RG shaped Milford to the village it is today, by following his own father’s footsteps and building the red bricked terrace houses, finishing the last of them in William street in about 1912. His father had built the first of those homes by constucting a small number on Hill Street in 1835.

RG McCrum also built Milford National School House in 1860, which is now referred to around Milford village as ‘The Old School House’.

Today it is used as a community centre by the Milford Community Development Association after receiving a grant to fully restore the building.

RG McCrum was also a leading member of First Armagh Presbyterian Church on the Mall and paid for almost half of the building costs in 1879. His son William later became famous for inventing the penalty kick in Milford village in 1890, which was then introduced into the game in 1891.

The McCrum family grave – where RG McCrum and his famous son William are buried – has recently been restored by a local group, Milford Northern Ireland Supporters’ Club.

Members took on the task of raising over £7000 to have the grave – located within St Mark’s Parish Churchyard in Armagh – restored, as they felt replacing the grave at a cheaper cost would ruin the history of the famous family.

They enlisted the help of the Amalgamation of Northern Ireland Supporters’ Clubs, who helped secure funding from FIFA to ensure the work was done.

Today the village will remember RG McCrum, the visual impact of whose life lives on even now 100 years after his own death.

Body of a man found in house in Armagh