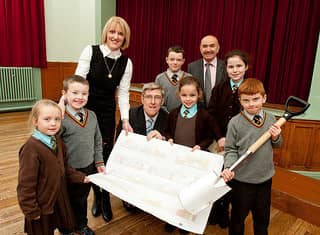 Work has started on a new £5.2million school for St Clare’s Abbey Primary in Newry, with Education Minister John O’Dowd attending to cut the first sod.

The Department of Education has committed £5.2million to the project, which will provide a new 15 classroom school with modern facilities for pupils and staff as well as giving a boost to the local construction industry.

Speaking at the site the Minister said: “St Clare’s Primary School was part of the educational fabric in the Newry area for over 140 years and St Colman’s Abbey Primary for more than 75 years before the two schools amalgamated at the start of the current academic year. Currently operating on two single gender sites, this marks the beginning of an exciting new era for the newly formed school as it looks to the future and the vision of coming together in one state-of-the-art, bespoke facility.

“The start of construction work represents an investment of £5.2million by my Department in the future of this area and its community. The new facilities will deliver a modern, progressive learning environment for the school’s 400-plus children. Work is under way and expected to be completed by December 2015.

“The provision of this new accommodation will also ensure St Clare’s Abbey Primary is well equipped to deliver the curriculum to the existing pupils and future generations.”

In conclusion the Minister said: “I would like to thank and pay tribute to everyone involved with this project for all the hard work they have undertaken to reach this stage in the development of St Clare’s Abbey Primary School. You can look to the future with real optimism.

“I also hope to be able to return in the future to see the new school building once it is completed.”