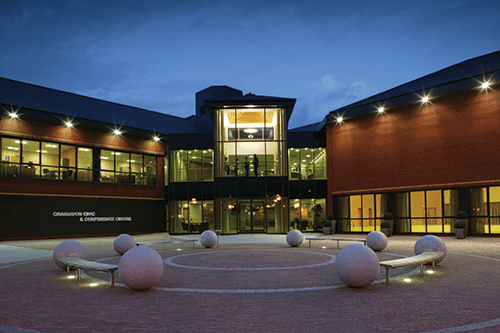 The new name of the ABC super-council has finally been decided – and it will be known as Armagh City, Banbridge and Craigavon Borough Council.

The decision was taken at a meeting of the shadow council in the Craigavon Civic Centre tonight (Thursday).

Indeed, this was the last of the 11 new super-councils to agree upon a name.

Nationalists had been opposed to the inclusion of ‘Craigavon’ in the name, taken after Lord Craigavon, the first Prime Minister of Northern Ireland.

But unionists had been united in saying Craigavon must stay.

Councillors were also keen that the name ‘Armagh City’ should stay, reflecting the ‘city status’ of Armagh which was bestowed two decades ago and the more recent awarding of ‘Lord Mayor’ office.

Councillor Jim Speers, the Ulster Unionist Group Leader of the new Armagh City, Banbridge & Craigavon Council, has hailed the consensus which has enabled the name of the new council to be confirmed at last Thursday night’s meeting.

Councillor Speers said: “A lot of effort went into getting a consensus on the name of the new Council. In the interest of a proper working relationship and to help usher in a new era, a tremendous effort was made to achieve consensus on this issue by bringing everyone on board.

“I tried repeatedly to have a meaningful discussion to creating the consensus – and arrive at a name that had a buy-in from everyone.

“Only last week some nationalist councillors threatened to go to court to prevent Craigavon being in the name as a snub to one of the founding fathers of the modern Northern Ireland, Lord Craigavon.

“I congratulate the SDLP on their ‘road to Damascus’ conversion. Indeed the SDLP actually proposed the name of Armagh City, Banbridge and Craigavon.

“At that point I grasped the opportunity to build consensus and to have all parties collectively re-engage. I am very pleased to say that consensus won through and trust that this bodes well for the future.”

Cllr Arnold Hatch added: “Due to the leadership displayed by Councillor Speers and his eleven other Ulster Unionist Party colleagues a unanimous decision was reached and augers well for the future of local government in the whole area.”

Some of the previous names suggested had included:

The Civic Centre, at Lakeview Road in Craigavon, will be the main headquarters for the new ABC Council.

Armagh will retain civic responsibilities – hence the wish to retain the ‘city’ element to the name – while planning functions will be assumed in Banbridge.

The 11 new super-councils will take over from the 26 local councils on Wednesday, April 1, during the biggest shake-up in local government administration here in 40 years.

Bin protest cancelled ‘due to complete lack of interest’