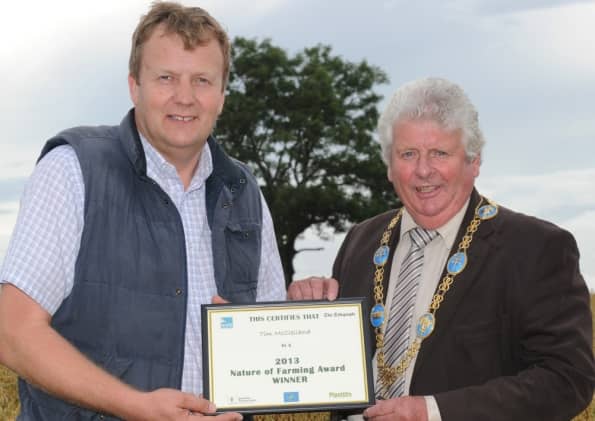 AFTER weeks of public voting and a nervous wait for the final tally to be announced, Tandragee farmer Tim McClelland has been crowned runner-up in the RSPB’s Nature of Farming Award 2013.

The awards recognise the extra mile that farmers like Tim go to give nature a home on their farms and the competition was tougher than ever this year, with the number of UK finalist increased from four to eight.

Tim’s arable farm is a perfect example of how a large, commercially successful farm can support a diverse range of birds and wildlife and he entered the completion in a bid to show that producing food and protecting nature can go hand in hand.

Across the UK more than 13,000 people cast their votes in this year’s competition – almost 20 per cent of which were for Tim alone.

The public were clearly inspired by the work he does across 270 acres, such as sowing wild bird cover, leaving rough grass margins around his fields for insects and planting hedgerows to provide habitats for a range of wildlife.

As a result of his efforts, his farm attracts seed-eating species like the yellowhammer, tree sparrow and the linnet as well as butterflies, bees and mammals including the Irish hare and soprano pipistrelle bat.

He was just pipped to the post by Nicholas Watts from Lincolnshire, who also believes that farming and wildlife go hand in hand and has proven this with his extremely successful and profitable farm business.

On his 2000 acre farm Nicholas grows a wide range of crops including wheat, potatoes, oilseed rape, sugar beet, millet, canary seed and sunflowers which he grows for wild birdseed seed. He also farms 300 acres of his land organically, primarily with wildlife in mind.

Although Tim (pictured with Lord Mayor of Armagh, Cllr Robert Turner) admits “it would have been nice to bring the trophy home to Northern Ireland”, he says he has taken a lot of positives away from the competition.

“My aim was to get across the message that farmers are more than just food producers, we are the custodians of the countryside,” he said.

“I am really glad I took part in the Nature of Farming Award and want to thank everyone who has supported me. I hope the publicity around the competition has changed some people’s perceptions and inspired them to do their bit to give nature a home on their patch.

“I’m going to keep doing what I have been doing to helps birds and wildlife because, for me, it just comes naturally.”

Congratulating Tim on his achievement, Hayley Sherwin from the RSPB said: “We are extremely pleased that Tim achieved second place in this prestigious competition, especially considering how stiff the competition was this year. This shows just how much public support there is in Northern Ireland for farmers who do extra to support wildlife on their farm.

“Through careful management, Tim’s farm is a haven for nature and farmers like him should be celebrated as they are keeping the countryside alive with the sights and sounds of our wonderful birds and wildlife.”