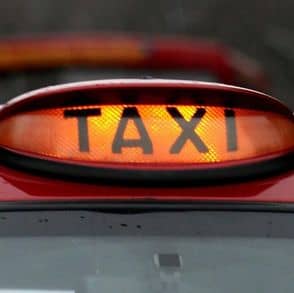 EIGHT taxis with faults or using illegal fuel were clocked during a police operation examining cabs in Lurgan and Portadown.

The local Neighbourhood Policing Teams joined forces with Driver Vehicle Agency and HM Revenue and Customs on a major op and, it has been revealed, of those checked, defects included defective suspension, tyres and lights and not having a PSV licence.

Of five taxis checked by HMCR, three were running on rebated fuel, one was using laundered fuel and another using fuel that “required further checks”.

A PSV licence for one vehicle was actually in the previous owner’s name. And, not just that, the licence had been suspended and there was an issue with rebated fuel.

Another cabbie had no taxi operator’s licence and was also reported for rebated fuel.

Several taxis had defective tyres while another had a defective roof sign.

Sergeant Duncan McBain said: “This was a very successful operation and sends out a clear message that police, DVA and HMRC will work together to improve road safety and prevent defective vehicles being driven on our roads.

“Our aim in carrying out these operations is to keep people safe on the roads and to reduce the number of people killed or seriously injured on our roads. The responsibility is on motorists to ensure their vehicles are roadworthy.”