Excitement grows as ‘comet of the century’ races towards sun! 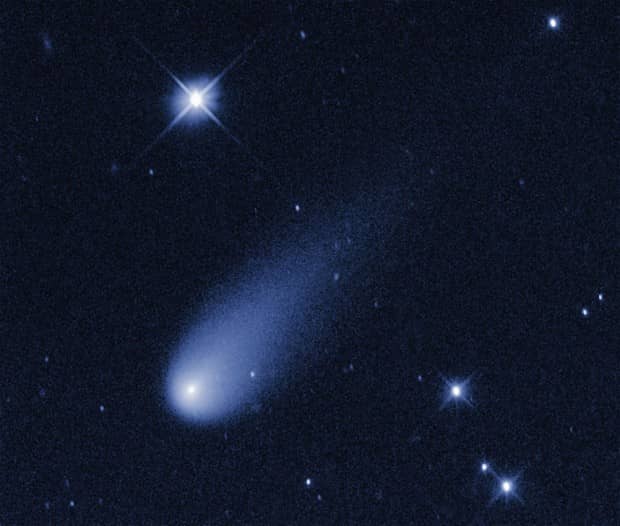 A comet which could become the brightest for a century is racing into the inner solar system to the delight of astronomers.

And Comet ISON, discovered in September last year by two amateur astronomers, will be more than 100 times closer to the  sun than the Hale-Bopp comet, one of the brightest of the last century, which was visible with the naked eye for a record 18 months, passing at its peak in 1997.

As it blasts towards the sun, the intense gravitational pull will make it speed up to 234 miles per second!

The sun’s rays will also heat the ball of  ice, metal and rock to 2,760 degrees Celsius, making it much brighter than most comets – with some scientists claiming it could outshine the moon.

Some have warned that the intense pressure on  the comet could simply blast it apart, as the heat melts not just the ice but  also rock and metal.

However, recent calculations have shown ISON  is more likely than not to survive when it comes closest to the sun on Thursday of next week.

If it does, in just 10 days time it should create a spellbinding cosmic spectacle, as ice in its body vaporises and forms a distinct bright tail.

Armagh Observatory reports: “Discovered in 2012, Comet ISON is brightening rapidly as it moves on its orbit with increasing speed towards its point of closest approach to the sun.

“Here, on November 28, it just grazes the sun’s surface. The comet is best viewed with binoculars before dawn from a dark site with a clear view towards the eastern or south-eastern horizon.

“Astronomers are hoping that this rare ‘sun-grazing’ comet will become visible with the naked eye, either before closest approach to the sun or shortly afterwards in early December.

“Nobody can yet say how bright the comet will be or whether it will even survive its encounter with the sun’s strong gravity and hot, fiery surface.

“However, astronomers are eagerly observing this comet’s passage on its journey around the sun, and are keen to discover its eventual fate.”

Over the weekend, some amateur astronomers began posting the first pictures of the comet on the internet that were taken with just binoculars or small telescopes.

Pilot Brian Whittaker wrote on the  SpaceWeather.com website: “I finally saw Comet ISON for the first time using small binoculars! It was  faint, but is predicted to brighten and move each day! Exciting!”

It is expected to be visible to the naked eye in early mornings throughout December and during the night in January. It is currently passing through the constellation Virgo in the east of the morning sky.

Comets are believed to be frozen remains left  over from the formation of the solar system four and a half billion years  ago.

See the Armagh Observatory website for links to sky charts showing the comet’s changing position against the background stars.