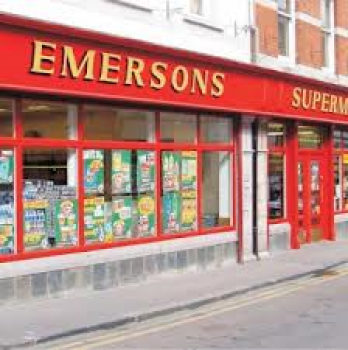 Emersons Supermarket has been granted planning approval to open a new bar/restaurant in Market Street, Armagh I can exclusively reveal.

An application for the development was submitted in July, as we first reported, as part of a £2 million expansion programme by the supermarket, which is this year celebrating 125 years of trading.

In a bid to address some concerns raised, an updated application was submitted late last month and this week the DoE Planning Service signed an official approval granting full planning permission.

Work is progressing well on the expansion of the supermarket, which will include the relocation of the Post Office from the Eurospar shopping centre and allow for Sunday opening.

The licensed restaurant development is to be constructed on two floors and the plans include a lift to allow for access.

Located at 3-5 Market Street, it is in the old Walkers store, which closed last year, and will involve the conversion of previous office accommodation.

There were no objections raised to the planning application and all neighbouring businesses had been notified of the proposals.

There were no objections either from Roads Service or environmental health officials.

The application, as given in a professional planning report, refers to “the creation of a bar/restaurant on both the ground and second floor”.

It also states: “This proposal would enhance the area and be in keeping with the Conservation Area.”

The development will be an area that already has many other such facilities, including Uluru, Embers, Bagel Bean, Rumour and the recently reopened Market Place Theatre Bar & Bistro.

The report found no concerns with potential noise, nuisance or disturbance, given that there are others nearby, and this would be “no different to those which currently exist”.

The professional planning opinion found that the redevelopment of the Walkers store will be a positive move as it would ensure that the building would not lie derelict within a “primarily retail frontage”.

It acknowledges that there are numerous restaurants within this immediate area, and “there would appear to be a demand”.

It was, therefore, viewed as a proposal which “will aid the vitality and viability of Armagh as a retail core”.

Work started earlier this year on the site at Market Street for the supermarket expansion.

It means the supermarket, which currently employs more than 100 people, will, when completed, enjoy access via McCrums Court, Scotch Street and Market Street.

The family-run business – one of Armagh’s biggest and most popular retail employers – was founded in 1889 by HA Armstrong. It is now under management by the fourth generation of the Emerson family, as HA Emerson’s son, Newton, subsequently took over, and then his son Henry, after he.

Today the day-to-day running of the store is in Henry’s son Gavin’s hands and this major expansion and branching out will ensure the tradition lives on for many more years to come.

The new bar/restaurant will significantly add to a ‘cultural quarter’ at Market Street, something which Armagh City and District Council has been at pains to promote, and help to boost further the night time economy in Armagh.