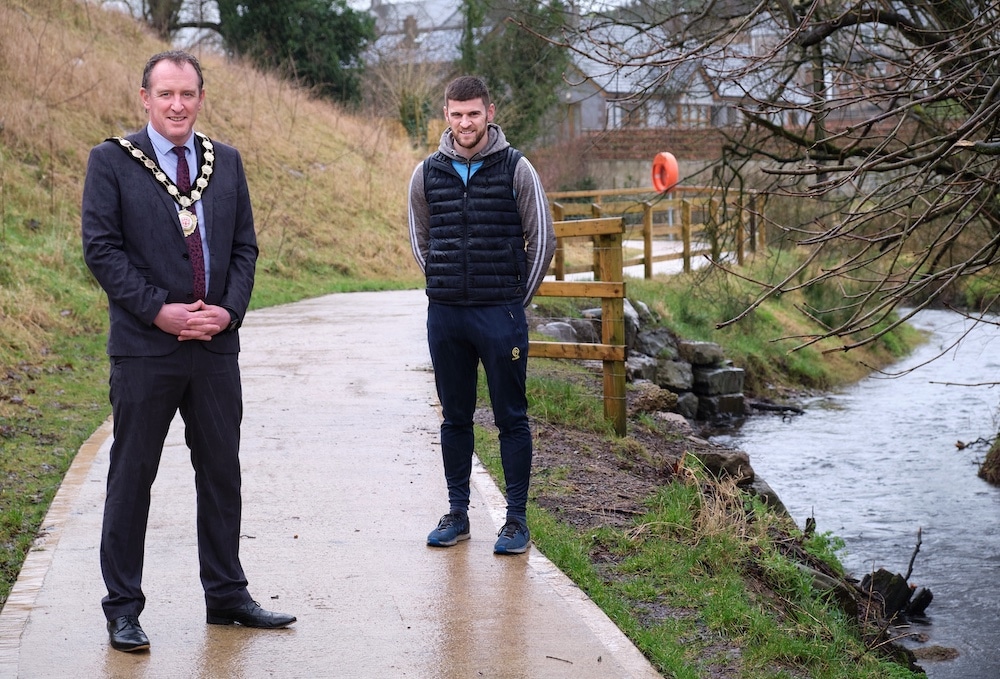 Work on a host of exciting new community and environmental projects across towns and villages in Mid-Ulster is due to start next month.

And a Co Tyrone company – MP Coleman Limited – has been awarded the contract to get the job done!

Moy, Aughnacloy and Donaghmore in Tyrone will see big changes this year as a result of the work, as will Draperstown, Donaghmore and Castledawson in neighbouring Co Derry/Londonderry.

All fall within the jurisdiction of Mid-Ulster District Council.

The environmental and regeneration works – estimated by Construction Information Services to cost in the region of £700,000 – will be carried out thanks to a substantial Peace IV cash injection under the ‘Shared Space Capital Villages’ Project.

The Moy Riverside Walk project is one of the six schemes.

It will involve the cutting back and removal of trees where necessary, as well as the current post and wire fencing

The work will involve the installation of an ecologically-friendly riverside path featuring ‘Hexapath’ grass, which helps reduce the risk of falls.

There will also be new boundary treatments and lighting put in place along the the full length of the path.

Meanwhile at Aughnacloy Playing Fields, there are plans to provide a new state-of-the-art playground complete with the very latest play equipment.

The works also include the provision of fencing, rubber mulch safety surfacing, together with signage, litter bins and new seating.

The plans at Donaghmore, like Moy, take the form of a Riverside Walk, and will see lighting being installed – as well as a sensory garden.

There was also be a clean-up operation targeted along the existing path at Church View and this will involve much-needed powerwashing, with trees and shrubs to be cut back.

The works proposed at Draperstown centre around the council’s Plantin Park and Fairhill amenity space.

The former will see the addition of lighting and the cutting back of trees, paths being cleaned, new fencing erected and some existing fencing to be repaired.

Planting is also planned, while picnic benches and litter bins will be installed. Signage will be put in place too.

Fairhill will benefit from a regeneration project involving the laying of new paths, grass area and picnic area with new features.

A multi-use games area is on the cards at Castledawson. It will be constructed at the village recreation site. External works are also planed at the Pavilion.

Meanwhile, Moneymore recreational site is also in line for improvements. These will take the form of cutting back of trees and hedges, cleaning of paths and installation of new bitmac paths and kerbs. There will be new signs, bins and lights installed too.

Work on all six projects, which have already been approved, will begin in March.

All are due to be completed before the end of June this year.