Memorial garden opens for those who died in Dungannon Workhouse 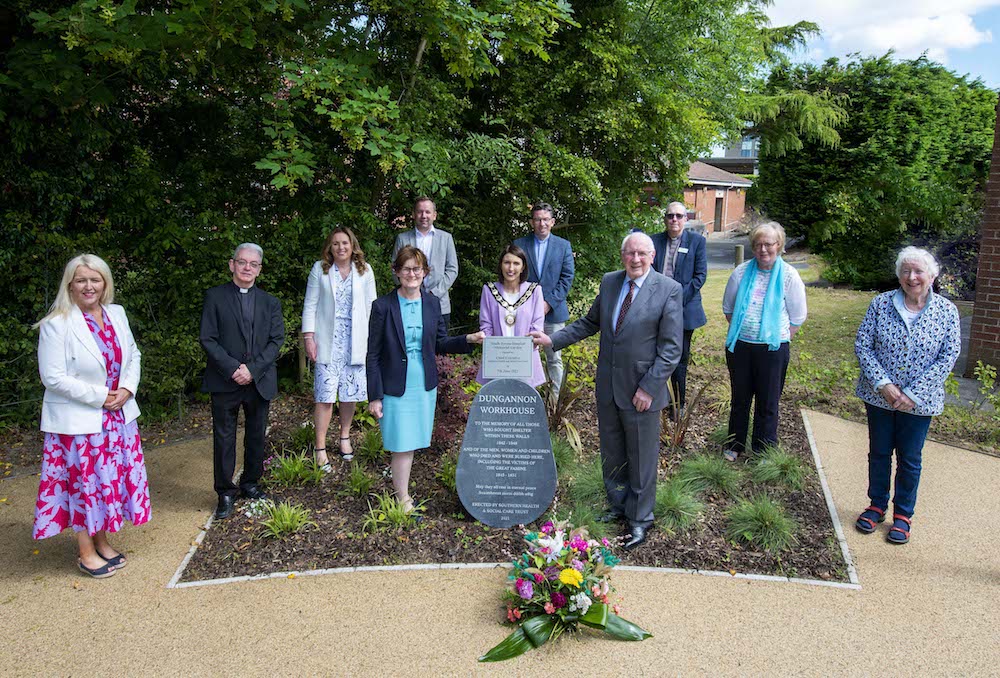 Members of Donaghmore Historical Society with Chair of Mid-Ulster Council, local religious leaders and Southern Trust staff at the opening of The Dungannon Workhouse Memorial Garden at South Tyrone Hospital.

A special event has been held to mark the official opening of the Dungannon Workhouse Memorial Garden at South Tyrone Hospital.

The garden was created by the Southern Trust as a memorial to all those men, women and children who are buried on the site and includes a special engraved stone in their memory.

Members of the Donaghmore Historical Society, Trust staff, as well as the Chair of Mid-Ulster Council and local religious leaders were among those who attended the opening.

Dr Maria O’Kane, Southern Trust Chief Executive, welcoming everybody to the event, said: “It is impossible for us to imagine the terrible hardship suffered by so many people in this area in the 19th Century.

“It’s even harder to imagine that this is the site of a graveyard where hundreds of men, women and children who died in the Dungannon Workhouse were buried.

“As well as being a memorial to all those who died, this garden is also a space for reflection and a place for our staff, patients and visitors from the local community to come and take time out for quiet space, fresh air or to enjoy some exercise.

Exercise is so important for general overall health, we also know the benefits of being outdoors and connecting with nature for our mental wellbeing.”

Dr O’Kane also acknowledged the dedication and commitment of Mary MacGinty and other Donaghmore Historical Society members who campaigned over many years for a fitting memorial for the people who had died in this workhouse.

Bertie Foley, of the Donaghmore Historical Society, discussed the history of the Workhouse and those who experienced it.

In the 1990s, Margaret MacGinty from the historical society successfully campaigned and received support from the local council to have a plaque erected outside the old wall of the workhouse on Quarry Lane. More recently,

Margaret’s daughter-in-law Mary has been working with The Southern Trust on plans for this memorial on the site of the actual graveyard.

The Dungannon Workhouse was opened in May 1842 and its first residents arrived on June 23 the same year. The building was built to serve up to 800 people but during the period of the Great Famine (1847-1850), it catered for twice that number.

The first death was recorded on August 12 1842 and by the end of the century that number had risen to almost 4,000. A graveyard was created on the site of the Workhouse, where the majority of the inhabitants would have been buried.

The old Workhouse was finally pulled down in 1978. The date stone that sat above the entrance is on display today inside South Tyrone Hospital.

The garden is a symbol of growth and continuity, a reminder of how far the modern health care system has come since it’s origins.