He completed the task in a time of nine hours 15 minutes and has raised over £2,000 for the charity as it stands 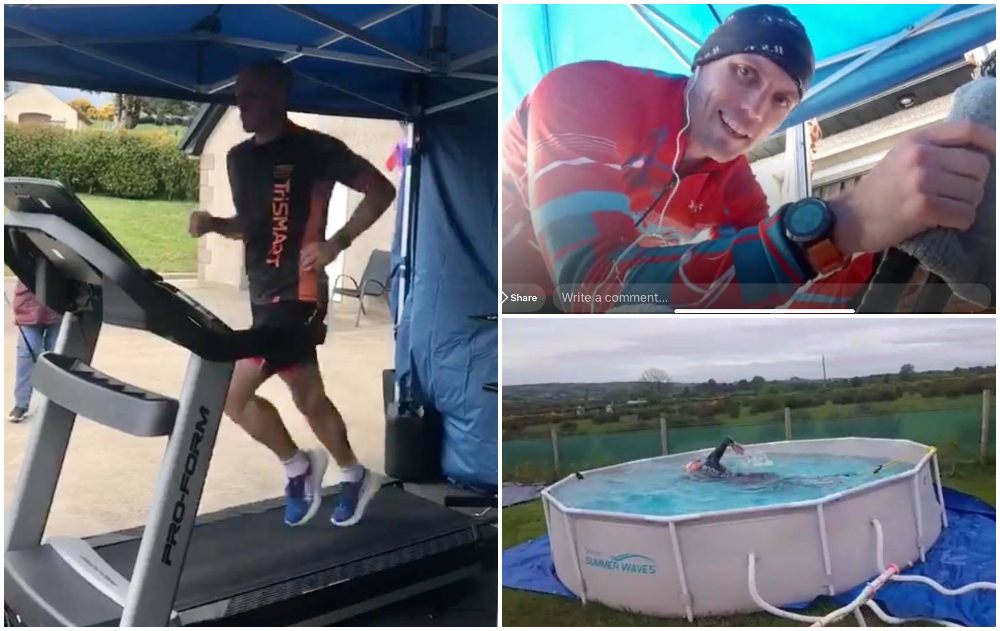 Mark Farquhar, of Tri Limits in Dungannon, undertook the mammoth task of a 2.4 mile swim, 112 mile bike and 26.2 mile run.

The Pomeroy man completed the task in a time of nine hours 15 minutes – and has raised over £2,000 for the charity as it stands.

Mark told Armagh I that this Iron Man challenge was the “toughest” he has ever completed.

“It all started a few weeks ago, I was turning 40 and obviously with everything that is happening birthday parties are out the window,” he explained.

“So I kind of thought of the idea of setting myself a challenge. I was inspired by the work that the likes of Captain Tom and others were doing in order to raise money for charity.”

Mark is the Chairman of Tri Limits Triathlon, who have members from Armagh, Moy, Cookstown, Dungannon, Ballygawley, Augher, Clogher, Lurgan and everywhere in between.

He said: “We have a partnership with the Niamh Louise Foundation. With everything at the moment I thought that mental health is definitely going to be a big topic and they like most charities are struggling.

“When I decided to do it, the next thing was how? I would train all year round but my biggest concern was that I had not been in the water for eight to 10 weeks at that stage

“So I started working out my upper body and I ordered a 12 foot by three foot pool from Argos. I set it up and had about 10 days of practice.”

Mark decided he would tie his legs to the edge of the pool using bungee cords and would swim for roughly an hour – his usual time for an Iron Man.

He said: “The thing is, I had been swimming in the pool around midday, on Saturday morning we lifted the cover off the pool and it was freezing cold.

“I checked the temperature and it just kept dropping and dropping, until it was below 10 degrees. At that point a normal race would not continue, so when I got into it to start, I knew it was too cold. I swam 20 minutes and had to jump out and run around.”

However, Mark’s brother, who was there to offer support, came up with an ingenious idea of pumping hot water into his wetsuit using a hose.

So the immersion was stuck on and they we were back up running!

“It helped, but it was still cold. My cheeks were stinging, my hands were numb with about 20 minutes to go I thought the water was running cold and I threw it out.

“My brother checked it was boiling hot, it just wasn’t helping anymore, but I made it through. My wife had a cup of hot orange juice for me, it helped, haven’t had it since I was a kid!”

Next up was a 112 mile cycle. Mark used a Watt bike combined with a programme called Zwift which calculates resistances to make a realistic cycle.

“Fifteen or so of my buddies joined me for this leg. It is probably harder than a normal cycle because there is no freewheeling whatsoever, in fact this is possibly the hardest Iron Man I have ever done,” he admitted.

Mark completed this leg of the Iron Man in an impressive time of four hours 52 minutes.

He added: “Then it was on to the treadmill, I wanted to run under three hours 30 minutes, so I set that task. I kept at the speed for a good bit but then around 16 miles in I felt my Achilles hurting. I thought it was going to snap.

“But the thing is, I had a 14 year-old son and an 11-year-old daughter there, and I was doing this for charity, It was a real dark point but I want to be a good role model for them.

“I pushed up the elevation on the treadmill as it was the only way I could keep going. This was the hardest Iron Man I have ever done.”

Mark confided that one of the biggest differences was that he was never, ever alone throughout the challenge.

“My family were watching all the way as were others on Facebook Live,” he explained. “People were passing tooting their horn, others sending messages of support. It made it much harder to give up.

“I finished and crossed a makeshift finishing line my wife set up with a bit of red tape and two chairs.”

Mark said: “I just hope this raises awareness. I think with mental health there are good days and bad days. There is a spectrum and I feel that more people are moving to the wrong end during this situation.

“I also hope this shows people how tough these things are. It used to be people would do a 10K, now they are trying to do marathons without the right training and end up getting injured, but this will encourage others to get off the sofa and set challenges.”

If you would like to make a donation you can do so on Mark’s JustGiving page.