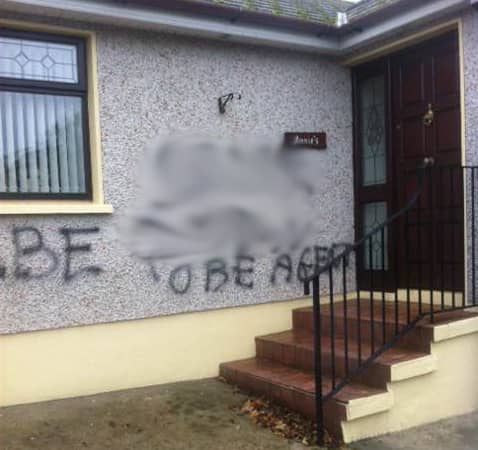 This was the scene of an overnight graffiti attack on a house in the Forkhill area.

Police tonight appealed for information on the incident, one of two in the area last night.

Huge letters were daubed on the property, on the Oldbridge Road, and it was reported to police at around 9.45am.

More graffiti was painted on the wall of a vacant pub in the Carricksticken Road area.

The Sinn Féin representative told Armagh I: “There is no justification for this disappointing and deplorable act and I share the anger of the local Forkhill community at the news of its occurrence.

“Attempts to intimidate through this type of action are cowardly and unacceptable and enjoy no support in the local community. Those involved should stop this activity now.”

Appealing for information Inspector Lorraine Dobson asked anyone with any information to contact police in Newtownhamilton on the non-emergency number 101.

Information can also be passed anonymously to the independent charity Crimestoppers on 0800 555 111.