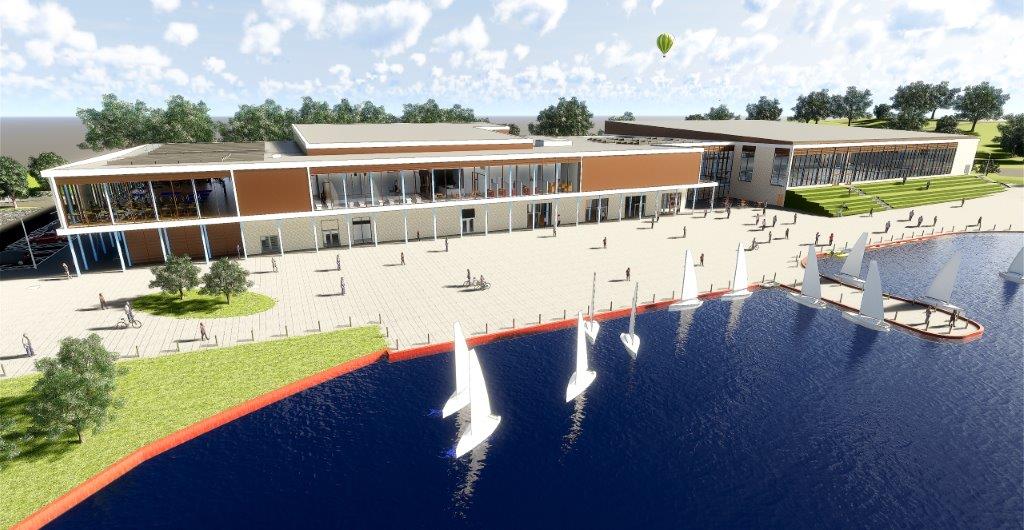 Plans for the £30 million South Lake Leisure Centre development in Craigavon will be recommended for approval tonight, Armagh I can exclusively reveal.

Less than four months after a formal planning application was lodged for the state-of-the-art centre and officials will recommend that the work be given the go-ahead.

That is the opinion which will be presented to Armagh City, Banbridge and Craigavon Borough Council’s planning committee when it sits on Wednesday.

The proposed development – by ABC Council – would see the demolition of the existing Craigavon Watersports Centre.

But a watersports centre will be integrated into the new building, which overall would have an internal floorspace of 14,595 sq metres.

There will also be a soft play area, a creche, squash courts, five activity rooms, a dance and studios, with provision for spin and dance, among other things, and a cafe.

The present use of the proposed site – 100 metres north of Lake Road – is described in the application as “land and buildings associated with the exisitng Craigavon Watersports Centre, lakeside jetty, adjacent parking area, amenity open space, pathways and lands within the curtilage of Craigavon Civic Centre”.

The planning application was submitted in August after five months of formal pre-application discussion with
council and statutory consultees, including Roads Service, Water Service and the Northern Ireland Environment Agency.

Council says significant stakeholder and community consultation has taken place over the last two years and as recently as September 2016.

Six public information events were held across the borough during that month.

Council says the comments were taken on board by the design team and contributed to the evolution of the final design, including reconfiguration of the 50m pool.

It would be only the second such facility in Northern Ireland to have such a pool and would provide facilities to allow for training for those involved in competitive swimming.

According to a design and access statement, compiled for council by Resolve Planning & Development, the centre represents “a major investment in the future of the immediate Craigavon area and is a significant investment by the council in the ongoing transformation of leisure facilities” within the borough.

It also states: “At the civic level, the proposals have been carefully considered to encourage interaction with both the existing facilities around Craigavon Lakes, and the proposed SRC development land lying north east of the leisure facility site by providing pedestrian and vehicular linkages. The new facility will integrate with the existing pedestrian, cycle,bus and road routes, serving both the local area, and the wider region.”

The statement says the South Lake Leisure Centre will “provide a modern civic building in an attractive parkland setting, befitting of the site’s location next to the Craigavon Civic Centre and in the heart of Craigavon”.

It would “transform the site and result in substantial physical and aesthetic improvements to the site and the wider area”.

Among those welcoming the development when plans were first submitted was Central Craigavon Limited, the owners of Rushmere Shopping Centre.

Correspondence had been received from Belfast-based planning consultants Turley, acting on behalf of CCL, which stated: “CCL fully supports the investment by council within Central Craigavon which will assist in growing the leisure offering within the immediate area whilst acting as a catalyst for future development.”

But Turley did, however, raised questions over parking provision.It pointed to the planning provision of a total of 326 spaces and one coach bay, supplemented by ‘set down provision’ and a covered cycle parking stand.

However, it referenced the Parking Standards document for new developments which would indicate a requirement for 427 spaces for the planning leisure centre when operating at “full utilisation”.

Council calculations, based on comparisons to other sites, had cited 324 spaces as being the maximum necessary to accommodate staff and visitors during any peak hour, and there was overflow parking available at Craigavon Civic Centre.

Parking and access were also issues which brought forward questions from the Department for Infrastructure.

But after viewing a transport assessment, an official this week said the Department was “now satisfied” with the conclusion that the “assessed junctions will operate within capacity”.

In a letter to the planning officers considering the proposals, the Department official stated: “Parking numbers and parking layout are now explained and agreed. This includes bus drop off area and measures to promote traffic circulation.

“It is noted that additional parking is available to facilitate special ‘one off’ events and that these events will require separate measures to be put in place.

“Replacement pedestrian/cycle routes are now proposed to a suitable dimension.

“It is noted that no further works have been proposed to upgrade the existing bus stops, lay-bys and approach paths and that these will be subject of further planning application to be linked by ‘negative condition’.”

Councillors on the planning committee will be informed that the opinion is the leisure centre should now proceed.

If the committee accepts that recommendation, it will then have to go back before the full council sitting later this month to be formally ratified.

Such endorsement could see it going out to tender early in 2018.

The plan is that the South Lake Leisure Centre would open to the public in 2019.