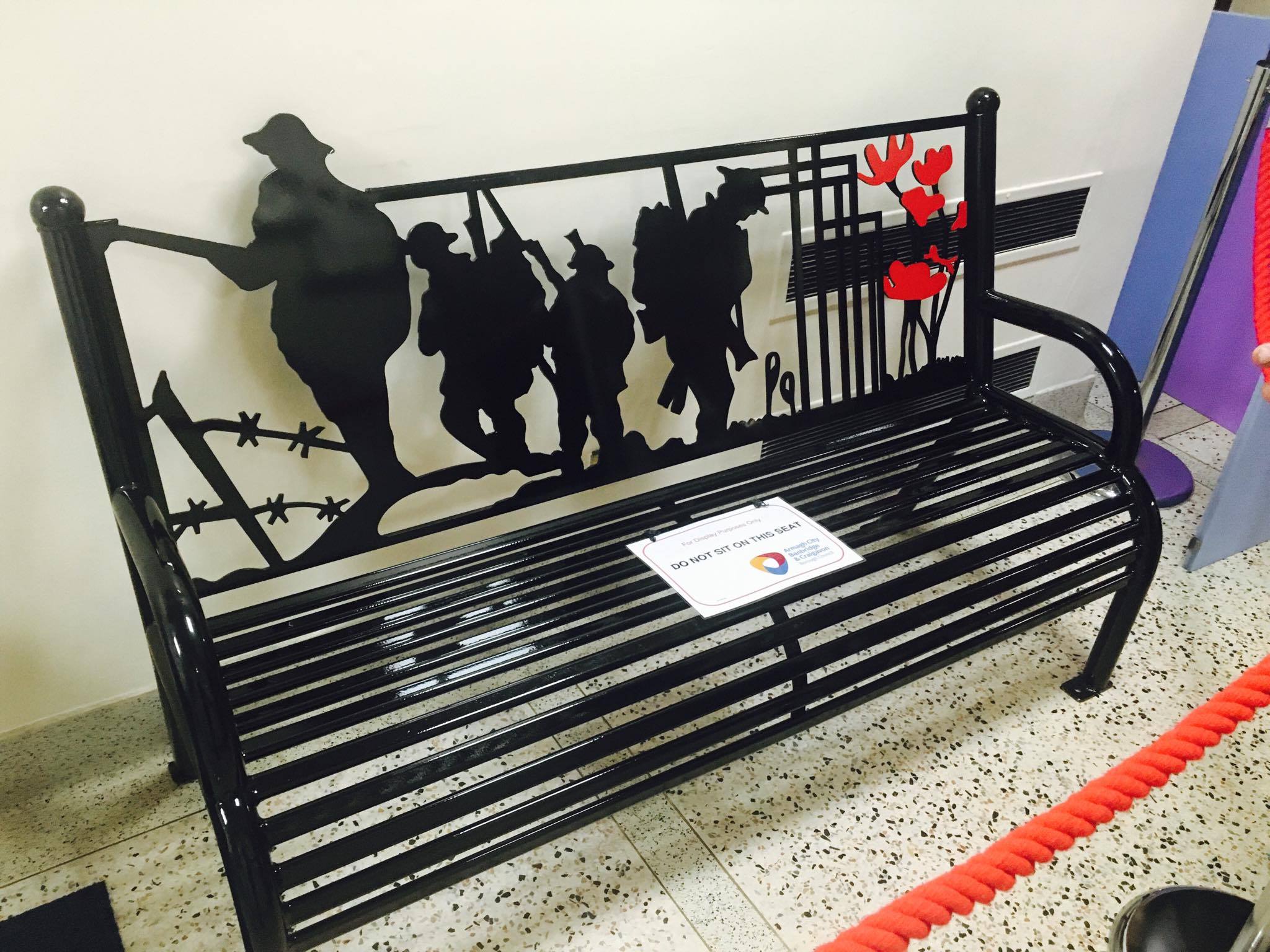 This exclusive picture shows newly-commissioned memorial seats which will be installed in Armagh City and towns and villages across the borough to mark the centenary of the Battle of the Somme.

The seats – only seen this week by local councillors – depict four soldiers going into battle and, in the top right hand corner, the blood-red poppy which represents remembrance of those who died.

Men, some even having enlisted as boys, fought in the Battle of the Somme, from all parts of the island of Ireland.

Almost two years ago, in August 2014, Cardinal Sean Brady and the Very Rev Gregory Dunstan, Dean of Armagh, officiated at a service on the Mall in Armagh, when three Irish yew trees were planted in the area behind the Cenotaph as a memorial to the 10th and 16th (Irish) Divisions and the 36th (Ulster) Division.

The gesture was to mark the centenary of the outbreak of the Great War. The commissioning of new memorial seats by Armagh City, Banbridge and Craigavon Borough Council will mark specifically the Battle of the Somme.

They are to be located in Armagh and at Portadown, Lurgan, Banbridge and are expected to be placed in other towns and villages – including, among others, Markethill, Tandragee and Richhill.

The seats are still described as a ‘work in progress’ and negotiations will now be carried out with the local branches of the Royal British Legion in each area to see where best to locate them.

The Battle of the Somme was expected to produce a major victory which would bring to an end the carnage of the First World War.

But it did not end until the following November, when more than one million soldiers from both sides had been killed.

The total number of Irish casualties cannot be calculated with certainty but they affected every part of the island.

The Royal Irish Fusiliers were drawn from Armagh, Monaghan and Cavan; the Royal Irish Rifles, from Belfast, Down, Antrim and Tyrone; and the Inniskilling Fusiliers from around Omagh, Enniskillen, Derry and Donegal.

The Royal Irish Regiment numbers came mostly from Tipperary, Wexford, Waterford and Kilkenny, with the Royal Munster Fusiliers from Cork, Kerry, Limerick and Clare. The men who numbered the Connaught Rangers were drawn mainly from Galway, Sligo, Roscommon, Leitrim and Mayo, the Leinster Regiment from Offaly, Meath, Laois and Louth, and the Royal Dublin Fusiliers from Dublin, Kildare, Carlow and Wicklow.

The Irish Guards were drawn from all four Provinces, and the losses of all regiments will be remembered with the placing of these new seats.

Cusher DUP Councillor Gareth Wilson said his party grouping on council had originally made the proposal to roll out a number of remembrance themed seats at War Memorials across the new ABC council area.

He told Armagh I: “This proposal has taken some weeks to get to the stage whereby members had the chance on Monday evening to actually view the originally proposed seat ‘in the metal’.

“Viewing the seat I think it really is a ‘stand out’ piece and is certainly worthy of this special year, where we seek to remember the sacrifices made by soldiers from the region at the Somme to protect the freedoms we all fully enjoy today.

“Given there were a few options for this special seating scheme, colleagues felt it was important that any piece stood out and was easily distinguished at ‘first glance’ by the public.

“The makers of the seat have certainly produced an eye-catching design and one which be a fitting tribute for years to come.”

Councillor Wilson said council officials will now liaise with local Royal British Legion representatives in terms of allocating the seats across the area and “finding the most suitable locations within or around memorial sites for the seats to be installed”.