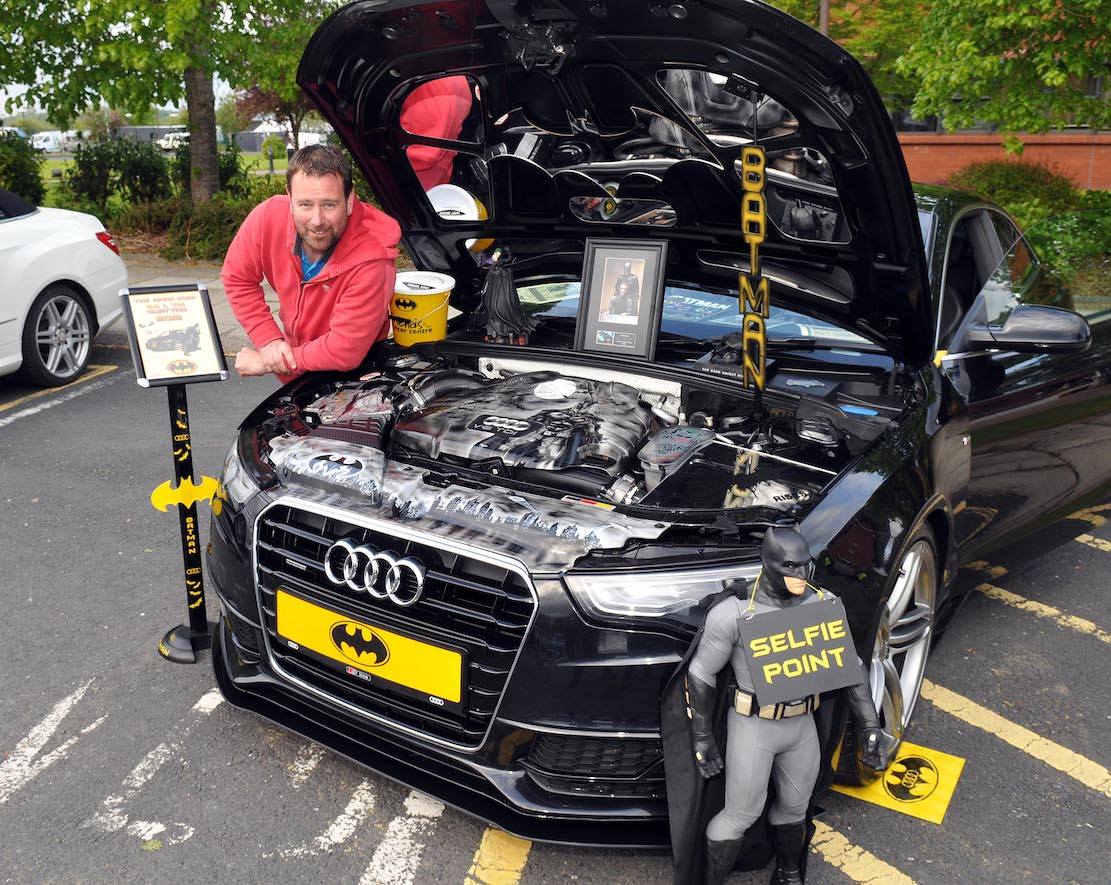 Craigavon Civic and Conference Centre was taken over by more than 100 very special cars – ranging from classic vintage cars to sports cars and everything in between!

Lord Mayor Flaherty commented “I am delighted by the amount of support by the public, from people attending the event to people bringing along their cars.

“I would like to thank everyone who supported the event and especially the guys from the Armagh Motorsport Association.

“This was my last big fundraiser before the end of my term in office and we raised a great deal of money for a very worthy charity close to my heart.”

Dave Pearce from Poradown with his 2012 Audi A5, 3litre TDI, which is called ‘The Dark Knight”. A very well prepared and presented car with very special engine bay paintwork.

Philip Spratt from Banbridge in his Porsche Boxter S at the Cars, Bikes and Coffee evening at Craigavon Civic Centre in aid of Downs Syndrome Association.

Lord Mayor, Councillor Julie Flaherty with the Casey Family, Gerard, Gillian and sons Rory and Oliver beside the Ford Mustang which they nicknamed the Hulk Car.

Lord Mayor of Armagh City, Banbridge and Craigavon, Councillor Julie Flaherty welcomes James and Denise Gilpin from Loughgall in their 1926 Talbot to the Cars, Bikes and Coffee evening.

At the Cars, Bikes and Coffee Event in aid of the Downs Syndrome Association at Craigavon Civic Centre are, Eddie Drury, Councillor Kyle Savage, Geraldine Lawless and Ruth Willis.

Ian Campbell from Donacloney with his Mini Cooper, Traveller.

Steven Ruddell with Jamie and Ryan Hilsden from Craigavon admire one of the cars
on display at the Cars, Bikes and Coffee.

Mason and Faith Kelly from Tandragee, beside a Caterham Seven Sprint at Cars, Bikes and Coffee.

Ian McCluney, Belfast gives the thumbs up as he gets a seat in the Aston Martin Vanquish owned by Diane Wright, Armagh. Included are, Rosa McAdam, Jasmine Wright and Sophie Wright.

Lord Mayor of Armagh City, Banbridge and Craigavon, Councillor Julie Flaherty with members of the Armagh Motorsports Association who helped organise the Cars, Bikes and Coffee evening in aid of the Downs Syndrome Association at Craigavon Civic Centre.