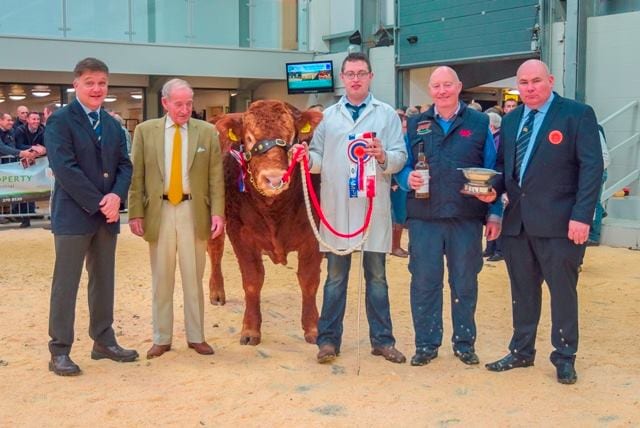 A pedigree bull reared in Cullyhanna, south Armagh has sold for a staggering £147,000 at auction.

Trueman Jagger, a Limousin bull, was bought at Carlisle mart by a syndicate of five buyers on Saturday afternoon.

He was sold by Henry Savage and Sons and with the average price for a bull in the same category £10,000, with the previous record being £110,000, the owners were obviously delighted.

Henry Snr said: “He’s a ‘once in a generation bull’, quite exceptional, and we have been very proud to breed him and bring him on.

“To sell him for a world record price is the stuff of dreams and something that you would never expect to realise.

“It’s quite humbling in many ways to do so but the family are excited about the bull’s future and we hope that he will go on to breed to his potential for the new owners and the Limousin breed as a whole.” Speaking of the Champion bull the judge said: “This bull just had got the lot.  He is the most powerful Champion bull I’ve seen with a super backend and top. With that he’s just full of class and style throughout, a truly exceptional Limousin bull and a great credit to the Savage family.”

At the close of the sale Melanie Alford speaking on behalf of the purchasing syndicate said:  “There’s exceptional potential in a bull of this outstanding quality.

“He has size, shape, style, is very correct, and walks well.  The terrific weight gain that he has shown is something that you would expect he will pass on to his progeny. He has fantastic figures and his bloodlines bring something a little different as well.

“He’s a ‘marquee’ bull with a huge future ahead of him and one in time that through semen collection we aim to make available to breeders and across the board both domestically and internationally.”

The price fetched by the bull was a new UK and European all-breeds bovine record.

It was also a new world record price for Limousin bulls.