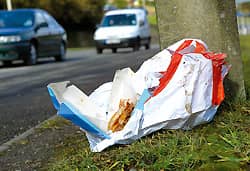 Ten court prosecutions were also undertaken by the council as it continues what it calls a litter crackdown.

If you drop litter you are committing a criminal offence and you will be punished – this is the latest message that Craigavon Borough Council is issuing.

“Littering is a disgusting habit and quite frankly it is down to individuals being too lazy to use a bin to dispose of their rubbish or not bothering to put it in their pocket or handbag and taking it home,” said Alderman Arnold Hatch, chair of the environmental services committee.

“Obviously littering is horrible to look at and can make our areas look unsightly but that isn’t the only issue. People fail to realise that litter is also harmful to our environment, can kill our wildlife and birds as well as attracting vermin.

“Add to this the £1.4 million of ratepayers’ money being spent per year cleaning our borough and you can see the blight that litter has in Craigavon. This is your money quite literally being thrown down the drain so we would urge those ‘litter bugs’ who still insist on throwing down their litter to think twice and take responsibility and pride in their area.”

The council says it is “extremely proactive when it comes to littering” with its environmental wardens patrolling regularly from early in the morning until late at night.

If you are caught littering the fine is £80 and for dog fouling £50.

“There is absolutely no excuse for littering in the Craigavon borough as we have one of the biggest networks of litter bins and dog bins across Northern Ireland,” added Trevor Clydesdale, neighbourhood environmental manager at the council.