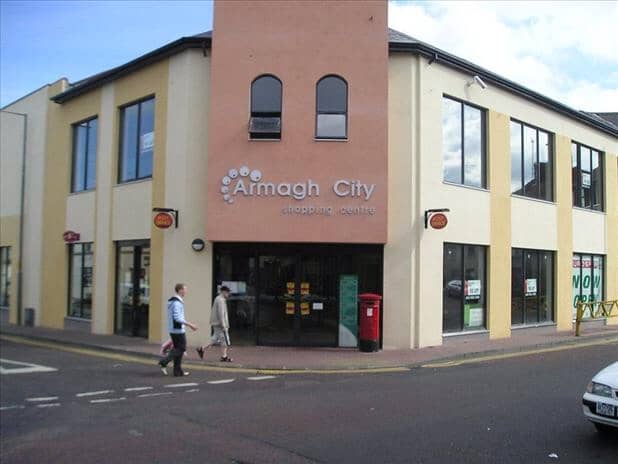 A delegation of local representatives and business owners met with regional managers of the Post Office on Friday, April 4.

The engagement, at Market Place Theatre, Armagh was to discuss a contentious proposal to relocate the local Post Office branch from its current location in Armagh City Shopping Centre to Emerson’s supermarket in Scotch Street.

The plans, which have faced stern opposition from Post Office customers and from other shop owners in the City Shopping Centre, are currently subject to a public consultation period which runs until April 25, 2014.

“The existing Post Office location is excellent” said councillor Keating, “it offers customers a convenient and easily accessible facility in the comfort of the shopping centre. There is nearby free parking, a modern, self-contained Post Office suite and a wide range of other essential and useful services nearby”.

“There is a well-established business community in the vicinity of the current Post Office to cater for the needs of those using it. In turn those businesses also rely on the footfall of patrons using the Post Office. To destroy that relationship would be a disaster for both Post Office customers and for local commerce in the area”.

Also critical of the proposals councillor Seaneen White raised concerns that the move was not aimed at improving service for customers but rather based on internal issues of Post Office management.

Councillor White said: “It is not only unnecessary but potentially quite damaging”.  She continued that she shared concerns raised as to the legitimacy of some aspects of the process and in particular how the consultation process had been framed.

“This meeting provided an opportunity for the Post Office officials to hear first-hand of some of the real consequences their proposals could have. For their part the officials reiterated that the matter is not yet a done deal and gave assurances that the consultation responses would be properly considered”.

Both Councillors stressed the vital importance for people to respond to the consultation document. “The impact of moving the Post Office branch to an area that struggles already with congestion makes little sense to consumers” said Mr Keating.

“Those views however have to be relayed to the Post Office if they are to be taken on board as part of this important process.  We would therefore urge people to speak up.”

Also speaking after the meeting councillor Dominic Bradley explained: “Today’s meeting was robust and frank, we left the representatives of the Post Office in no doubt of our very real concerns over their proposals. We pointed out some very serious errors in their consultation document and indeed in the process which they have engaged in to date.  The current location is very well used and the local community are very keen to ensure that it remains on its current site.’

“We pressed the representatives of Post Office on the quality of their consultation process to date, as we believe there are very serious flaws both in the documentation they have produced as well as the process they have engaged in. We have asked that they bring back our concerns and the concerns of the traders represented at the meeting to their senior management team in regional office and I will also be corresponding to the Regional Manager separately.

“Post Offices are a vital community resource and community service in any location; and this location is ideally placed beside existing retail units, the local health centre and pharmacies.  It is also ideally located close to accessible parking, both disabled and indeed free parking.   These issues seem to have been under-estimated in the current assessment of the site.’

“I would strongly encourage the local community and those who use the Post Office to respond to the consultation and to make their views known.”

The consultation can be responded to by emailing comments@postoffice.co.uk or by contacting staff at the Armagh City Shopping Centre .