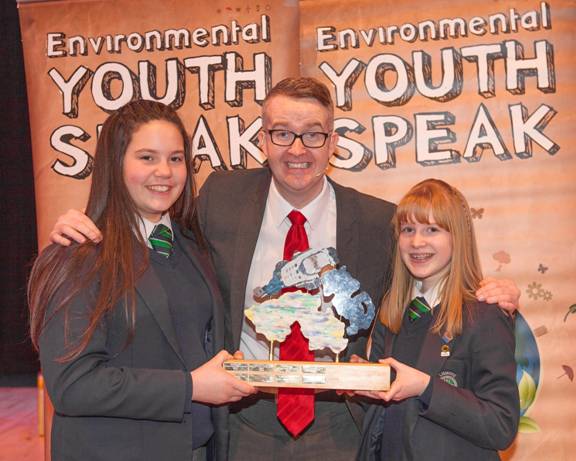 The aim of the competition is to encourage environmental awareness among young people by providing them with an opportunity to research and debate environmental issues. Through participating in this Northern Ireland wide competition pupils experience an improvement in their own communication skills and self-confidence.

The senior section, which was open to year eight, nine and 10 pupils, tackled the subject ‘Food glorious food, why waste it?’.

Students had to speak for up to five minutes on their topic and each pupil who took part demonstrated their high level of environmental awareness and understanding while providing well-reasoned presentations based on their research.

Chair of Environmental Services, Councillor Ronnie Harkness praised the duo for their success, saying: “Congratulations to Clodagh Haddock and Alex Lyons from Lismore Comprehensive. They came out on top despite tough competition, and left everyone thinking about our environment. It is great to know that our young people are so tuned in to this extremely important subject, it gives us hope for our environmental future.”

The successful Lismore Comprehensive students were awarded a perpetual trophy, £50 each and £500 for their school.