“Anyone who knows me knows I hate walking!” declares Rugby Legend Rory Best as he sets off on 180-mile walk 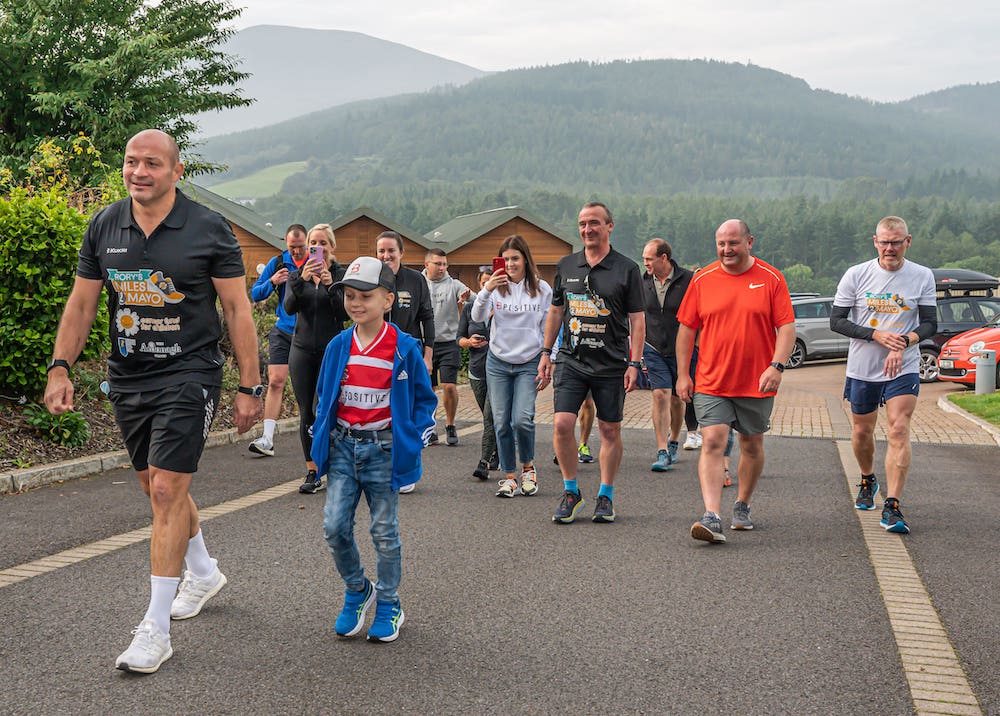 Adam Watson age 8 from Banbridge helps former Ulster, Ireland, British & Irish Lions Captain Rory Best kick off his mammoth walk across Ireland for children with cancer. Adam who was diagnosed with acute myeloid leukaemia (AML) in October 2019 walked the first mile of Rory’s challenge with him.

Throughout his journey Rory will be joined for short periods by families affected by cancer as well as some notable names from Irish and Ulster and entertainment including Tommy Bowe, Jacob Stockdale, Tadhg Furlong, Rob Kearney, Robert Balacoune, Bundee Aki, Conor Murray and well-known tv chef and personality Neven Maguire.

Over the next nine days Rory will walk from Cancer Fund for Children’s therapeutic short break centre, Daisy Lodge in Newcastle Co. Down to the site of a proposed second Daisy Lodge in Cong Co. Mayo.

He will  pass through Counties Down, Armagh (this Thursday), Fermanagh, Leitrim, Sligo, and Mayo, taking in over 30 towns and villages along his epic journey.

On Thursday he will walk through Newry, Belleeks, Newtownhamilton, Keady and onto Derrynoose, where he will begin his fourth day from.

“My family and friends will tell you that I’m not a fan of walking.  Walking 180 miles in nine days will be tough but nowhere near as tough as the challenges that families dealing with childhood cancer face,” says Rory.

“I’m not only taking on this challenge to raise vital funds but also awareness of the impact cancer has on the lives of children and young people.  Already an incredible £234,075 has been raised and I would like to thank our incredible sponsors, local schools, clubs and business for getting behind me. If you can, please donate to my challenge and cheer me on as I pass through your towns and villages.” Rory Best and his wife Jodie.

Rory has taken on this challenge in a bid to raise £500,000 for Cancer Fund for Children, a charity that is close to his heart.  For children with cancer, their childhood can be devastated by months of chemotherapy sessions, hospital stays, and time away from their family and friends. Cancer Fund for Children’s mission is to ensure the children don’t have to face this cancer journey alone and last year they provided emotional support to over 1,500 young people.

The charity’s services include restorative breaks at Daisy Lodge which is set at the foot of the Mourne Mountains.  Short breaks allow families to spend quality time together in a safe and nurturing environment, far removed from hospital wards and treatment regimes. However, for every family the charity can support across Ireland there are another six they cannot which is why they urgently need to build a second facility in Co. Mayo. Cancer Fund for Children’s CEO, Phil Alexander said: “We would like to wish Rory a massive, good luck as he steps up to this enormous challenge.  The team at Cancer Fund for Children will be supporting him all the way.  We would also like to thank our sponsors Kingsbridge Private Hospital and Ardonagh Insurance Group, SlurryKat, EUROSPAR  and ViVOXTRA,  Greg Mitchell Motors, Elave Skincare, HSM NI and White’s Oats for helping make Rory’s Miles 2 Mayo happen.”