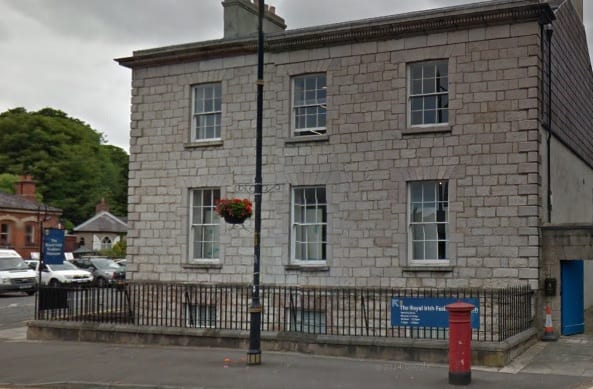 A special plaque illustrating a stamp that was part of a special set of astronomical stamps issued in 1990 celebrating the 200th anniversary of the Armagh Observatory was unveiled on Monday on a postbox in Armagh to mark the 50th anniversary of Royal Mail’s Special Stamps programme.

In 1990, Royal Mail issued a set of four astronomy stamps to commemorate the 200th anniversary of Armagh Observatory and the centenary of the British Astronomical Association.

Armagh’s special stamp plaque was unveiled on the postbox close to the bottom of the Observatory Drive and the Royal Fusiliers Museum, Mall East, Armagh.

This is one of 50 special stamp plaques that are being installed on postboxes throughout the UK.

Each plaque features one of the most popular stamps, each of which has a special connection with the UK city, town or village in which it is located.

It is hoped that the special Armagh Observatory stamp will attract attention and admiration from locals and tourists alike. Unveiling the new stamp plaque in Armagh, Professor Mark E Bailey, Director of the Armagh Observatory, said: “This is a great honour for the Armagh Observatory, Northern Ireland’s oldest scientific institution, and recognition too for the position of the City of Armagh as a centre of research, education and learning over many hundreds of years.

“As the Observatory celebrates its 225th anniversary as an international research institute, it is most appropriate that this special stamp should be among the most popular of those issued in the last 50 years.

“The stamp recognises Armagh’s important contributions to worldwide astronomy and related sciences, and more generally the strength of Northern Island’s astronomical heritage and that of the British Astronomical Association.

“The image on this special postbox celebrates the 50th anniversary of Royal Mail’s special stamp programme, whilst providing a further fascinating addition to the City of Armagh’s programme of public art, and an important contribution to the Observatory’s programme of science and community outreach.”

Eamar O’Hagan, Royal Mail Delivery Office Manager for Armagh added: “The UK’s towns and cities have influenced stamp designs over the past 50 years. We are proud that one of ourpost boxes in Armagh features a stamp of the Armagh Observatory that was issued in 1990.

“We hope that all our customers and visitors to Armagh enjoy this special stamp plaque and might even take a photo as a memento.”

The Royal Mail modern stamp programme has featured a total of 2,663 Special Stamps since July 1965, and every new stamp design is approved by Her Majesty The Queen before it is issued.

The special stamp programme has mirrored the changes in society and culture at large. Details of all the special stamps issued over the last 50 years can be found at: