Thank-you all! Ciara overwhelmed by your response to her efforts for Cancer Focus NI 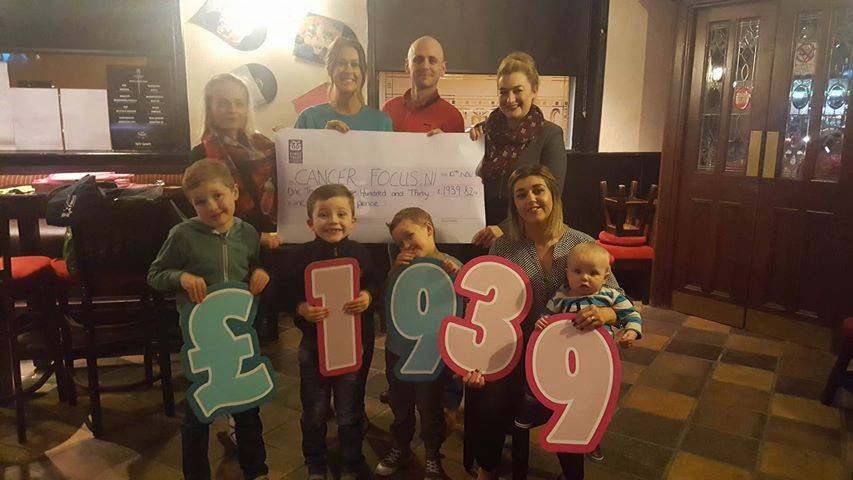 An Armagh woman with a rare cancer-causing gene has been overwhelmed by the outpouring of support since she bravely agreed to speak out to raise awareness.

And – as well as raising awareness – mum-of-four Ciara McKenna has also been raising money to help others.

A fundraising evening for Cancer Focus NI was held in the Northern Bar in Armagh last month.

And it was a truly great evening from beginning to end.

Thanks to those who showed up on the evening, bought raffle tickets and contributed via a JustGiving page, the fantastic sum of £1,939 has now been handed over to support the vital work of this wonderful charity.

Selfless Ciara and her sister Siobhan both inherited the BRCA1 gene.

The 31-year-old receptionist is planning to have a double mastectomy and have her ovaries removed as a preventative measure.

She spoke out last month to try and highlight the importance of women having checks.

“The more people know about it the more lives will be saved,” she said.  “I would also like to raise awareness of the BRCA gene. If you have had a strong family history of breast or ovarian cancer I would urge you to talk to your GP about genetic testing – it could save your life.”

Despite waiting for her own surgery, Ciara has been instrumental in trying to raise money to ensure others facing a cancer diagnosis will have the support which they require when they need it most.

Ciara – who is married to Michael – organised the Pink Party at the Northern Bar.

Music was provided by Heels & Reels and a great night, as they say, was had by all.

It was, of course, for a very worthy cause, and Ciara wants to thank everyone for all they did.

She joined with her four boys – Kian (7), Ryan (5), Marc (4) and eight-month-old Ethan – to present the proceeds to Suzi Colledge of Cancer Focus NI. Also included in our photograph are Ciara’s friends Zoe Hill and Leona McKearney, as well as Northern Bar owner Michael Hughes.

While a cheque has been handed over, donations are still coming in and you can still show your support; any amount, no matter how big or small, will help.

It was, of course for a very worthy cause, and Ciara wants to thank everyone who helped in any way, including the many very generous businesses who kindly agreed to donate prizes for the raffle.

She has not ruled out further ventures for the charity as she knows all too well that it would be unable to provide its valuable services without public support.

Adds Ciara: “I have a few ideas for more fundraising in the new year, but nothing concrete yet.”

If you would like to donate visit the JustGiving page here.