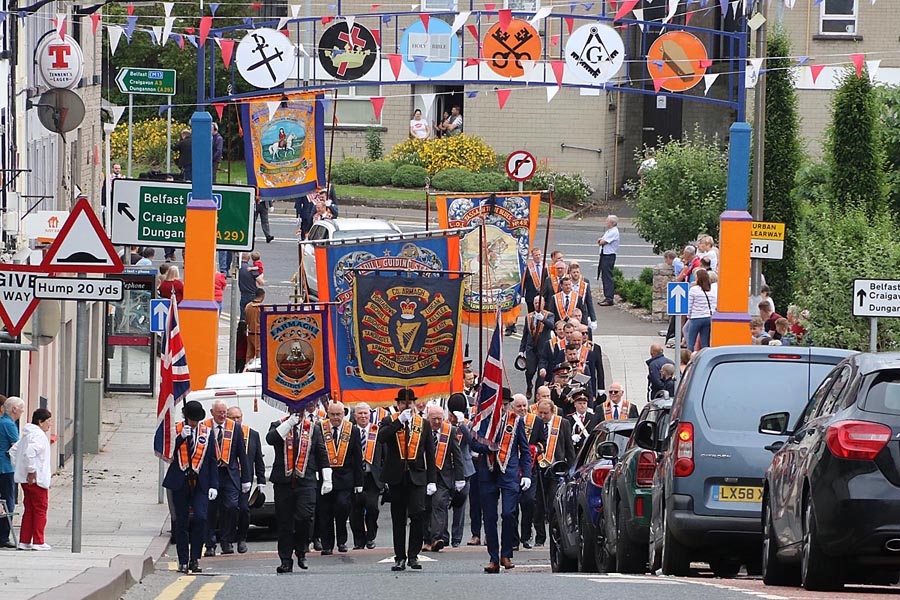 The Grand Orange Lodge of Ireland has confirmed details of this year’s Twelfth of July demonstrations, with the County Armagh parade to take place in the city of Armagh itself.

The institution has welcomed the return of full Twelfth of July celebrations in their traditional form after an absence due to Covid.

All 11 districts will be making their way to the Armagh for the demonstration, one of three focal parades to be held in Northern Ireland.

And the event in Armagh will be broadcast live on GB News.

Tens of thousands of Orange Order members, band members and spectators from all over the County and beyond are expected to converge on the city from an early hour.

Proceedings on the day will begin at the Mall East with a wreath-laying at the Cenotaph, as brethren and bands make their way to the setting down point at Portadown Road.

Upwards of 70 bands of all types including many Lambeg drums – and accompanied by well over 100 lodges – will then parade through the city centre en route to the Demonstration Field at Hamiltonsbawn Road.

The first of the lodges – hosts Armagh – is due to set off at around 10am with the others – Richhill, Killylea, Lurgan, Newtownhamilton, Keady, Bessbrook, Loughgall, Markethill, Tandragee and Portadown – expected to follow at 15 minute intervals.

Spectators will be taking up vantage points from early on, the parade making its way along College Hill, College Street and through the city centre and on to Barrack Street, where the traditional arch in memory of Herbie Burrows, murdered in a booby-trap bomb in 1984, has now been erected.

Participants will make their way past Gaol Square, up Victoria Street and across Drumadd, up Kiln Hill and on to the Hamiltonsbawn Road and the Demonstration Field, all arriving before lunch-time.

There will be the usual side shows, stalls and plenty of opportunities for refreshments and a bite to eat for those who journey out, and the weary walkers will have a chance to rest their feet.

District Officers will assemble on the platform for a religious service and the proposing of the resolutions, proceedings to get underway shortly before 2pm.

An hour later and it will be time for the first of the lodges to start the return journey, as they make their way home to board buses, brethren returning to their own Orange Halls where many will enjoy an evening meal and fellowship.

The return journey will be via Barrack Hill – passing the Orange Tree – and concludes at Mall East.

On this occasion, Lurgan will lead the way and Armagh, as hosts, will conclude the parade.

Grand Master of the Grand Order Lodge of Ireland, Wor Bro Edward Stevenson, is looking forward to the big day being celebrated across Northern Ireland.

He said: “I do not believe there is any other event on these islands that can bring such vast numbers of people onto the streets to enjoy our processions, either by taking part or simply to watch them go by. It is a custom which has been maintained for over 200 years, passed through generations, and will continue to be upheld for many years to come.

“I am please that this year the Twelfth celebrations will be broadcast live by GB News to a UK-wide audience.

“We continue to welcome an increasing number of international visitors to our celebrations who are keen to experience first-hand the spectacle of the biggest day in the parading calendar.

“High calibre music provided by some of the finest marching bands will only add to the festival atmosphere. We look forward to another glorious Twelfth.

“The Twelfth demonstrations will follow the traditional Rossnowlagh parade held in the Republic on the preceding weekend. This year the annual Donegal procession takes place on Saturday, 9th July.”