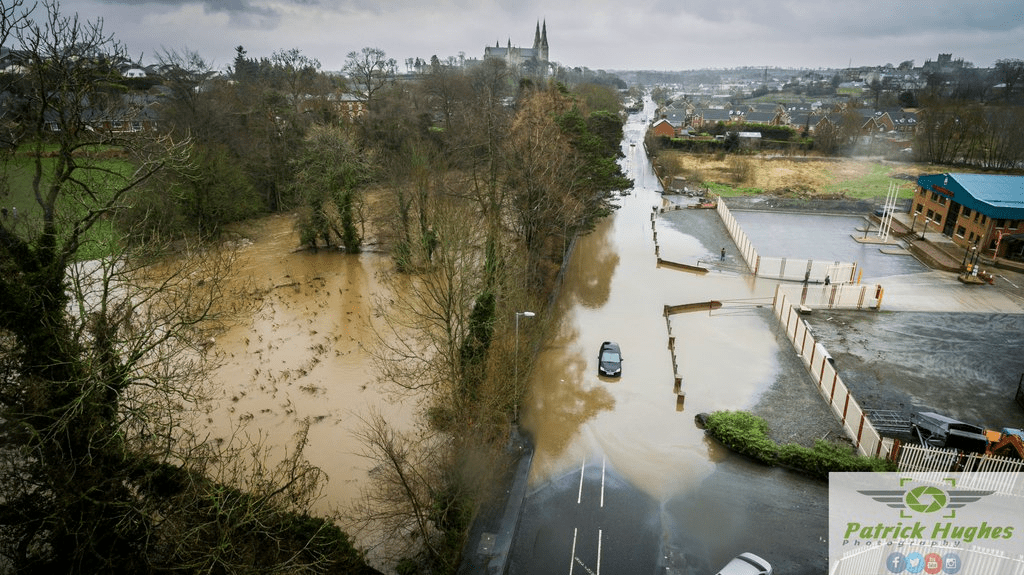 Ten homes have been flooded in Poyntzpass as Storm Frank wreaked havoc overnight.

Belongings have been destroyed and there are fears that other homes across County Armagh could also suffer with further rains forecast in the coming days.

Newry and Armagh MP Mickey Brady and local Sinn Fein MLA Cathal Boylan have visited residents this morning as they could the cost. Today, (Wednesday), the emergency £1,000 grant has been activated for tenants have been damaged as a result of the rising rainwaters.

“This can be claimed by the person occupying the property,” explained SDLP Councillor Thomas O’Hanlon.

Environment Minister Mark H Durkan said: “The payment is meant to ensure that homes are made habitable as quickly as possible. It is not a compensation payment. If you feel that you may be entitled to the payment, contact your council as soon as possible and they will arrange for an urgent inspection of your property. If the council decides that your claim is eligible, you will receive your payment promptly. My Department will reimburse councils for the payments to individual householders, and for the direct and indirect costs of providing practical assistance and advice.

“I and my Executive colleagues want to help those most severely affected to get back to normal as quickly as possible and to assist them in ensuring their homes are habitable. Working with and through councils, my aim is to ensure that practical and financial help is delivered to those most in need as early as possible. I would also urge people to keep an eye out for elderly and vulnerable neighbours and check that they are ok.”

Storm Frank packed a punch and did his worst, bringing misery for motorists and scenes of flooding not witnessed in many years.

Many parts were completely cut off and again drivers became stranded in the high waters. Trees were felled and there was a lot of debris strewn on roads, adding to the conditions.

Across Armagh city there was chaos.

The Killylea Road and Ballycrummy Road were under water and vehicles had become trapped.

The Callan River burst its banks on many parts of the city.

Public transport has been affected with some bus services cancelled and delays to some trains.

Armagh I has been inundated with messages, photographs and flooding, images showing severe floods around Drumbreda and on the Loughgall Road, as well as around the Old Callan Bridge, with the road completely submerged.

Other areas particularly badly hit were the Cloveneden Road, between Loughgall and Moy, Navan Court, the Cathedral Road – outside the nursing home – parts of the Portadown Road, Armagh, and at Brannock Meadows in Poyntzpass.

The Markethill Road to Portadown Road had been closed between the Derryhale junction and Burkes of Cornascriebe. And the A1 south bound carriageway between Dromore and Banbridge had been impassable for a time.

The coastal roads were particularly badly hit and the road between Newry and Kilkeel closed, with motorists requiring to be helped from their vehicles.

The PSNI reported that the main road between Newry, Warrenpoint and Rostrevor was now passable with care.

But it advised motorists to pay heeds to the road signs and instructions.

Posting via Facebook, the PSNI Newry and Mourne advised: “Roads are closed for a reason, the signage indicates they are closed and therefore no one should remove these signs and attempt to travel on a closed road.

“The volume of water is such that several drivers have already had to be rescued from their cars in these areas, and we have previously seen cars literally washed away in these areas with flood waters.”

Further winds and rains are expected over the coming days and again the public are advised to remain extremely cautious to the conditions.