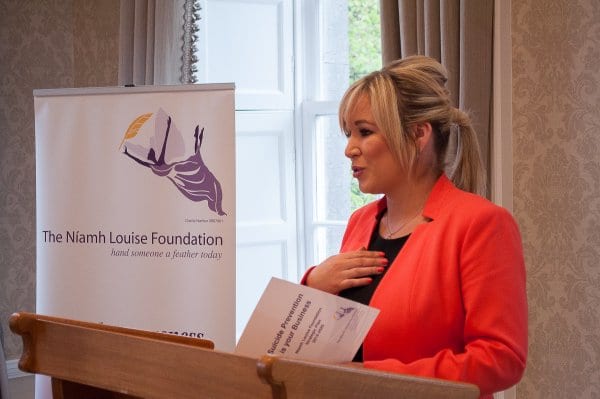 A mother who lost her 17-year-old son to suicide spoke at a Niamh Louise event in Armagh as the charity unveiled its Strategic Plan for the next five years.

Suzanne Cooper, addressing the event at the Palace Demense this week, spoke candidly about the loss of her son in 2013. She said the Niamh Louise Foundation “became a flash of light in a dark tunnel when we lost our son Matthew to suicide three years ago”.

“I have found the confidence to return to part-time work and engage in my community thanks to them,” Mrs Cooper added.

Chairman of the Niamh Louise Foundation, Dr Alan Turtle, described the statistic of 300 deaths to suicide across Northern Ireland every year as “unacceptable”.

He said: “Unfortunately the statutory services don’t deal as adequately as they should with mental health issues and with suicide particularly, because they do not have either the time or the resources. We will be working to see that change.

“We all know that prevention is better than cure. The medical model of suicide prevention alone does not go far enough to support the self-harm and mental health issues in today’s modern society and so we need to develop our community based grass roots services which can support the work of the health professionals.”

Cllr. Darryn Causby, Lord Mayor of Armagh, Banbridge and Craigavon District Council, who hosted the event, said: “For too long the issue of suicide has not been addressed openly and without fear at community level and, as Lord Mayor of Armagh, Banbridge and Craigavon Council, I believe that we can truly make a difference to the predicted rising deaths by suicide in our rural communities.”

The charity’s plan of action, entitled Suicide is your Business, was unveiled with the newly appointed Health Minister, Michelle O’Neill, travelling to the event in her first official engagement in the role.

The plan pulls together ten years of learning and experience from the committed and dedicated committee members, staff and volunteers and sets out key aims and objectives for delivering the service, which include de-stigmatisation of suicide, development of training and educational programmes, raising suicide high on the NI political agenda, encouraging more community volunteers, and, most importantly of all, providing a safe place for those at risk of suicide/self-harm and those bereaved by suicide, to help them reach a place of recovery and well-being.

The Niamh Louise Foundation was set up in February 2006 following the death of a local 15-year-old girl who died by suicide.

Email info@niamhlouisefoundation.com or telephone 87753327 if you need to speak to someone about the services provided.