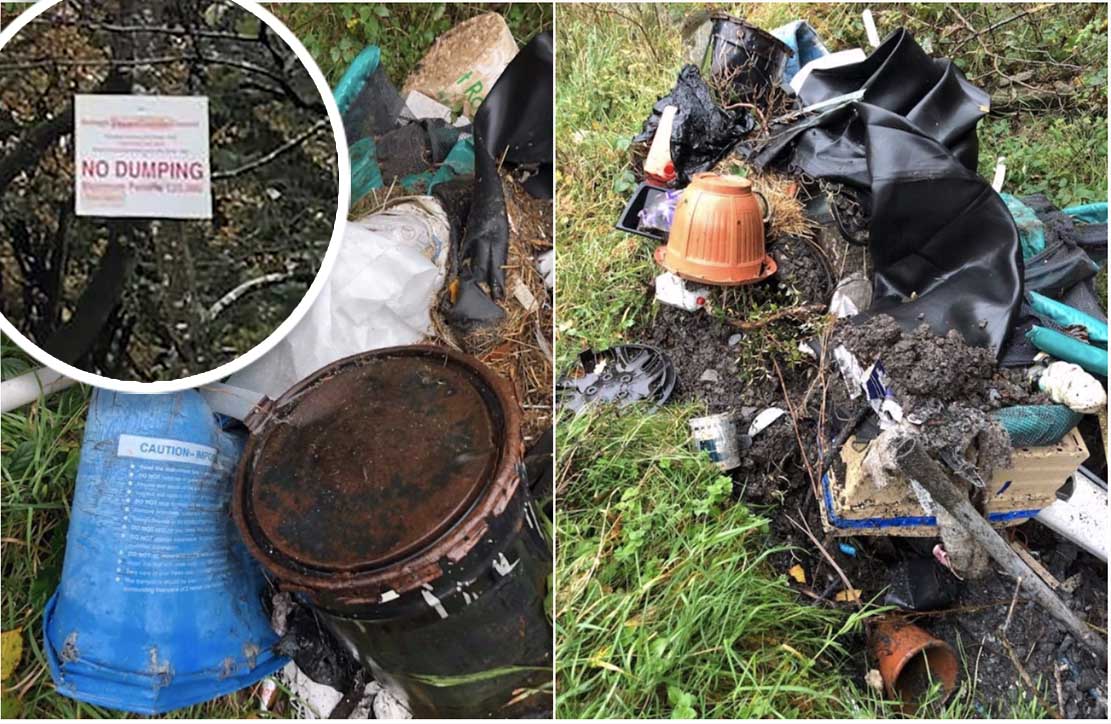 Some of the rubbish and waste dumped at Darkley Forest last October - one of many incidents of fly-tipping in the area over recent times.

Taxpayers have paid out more than £500,000 – the equivalent of employing 15 nurses – cleaning up the mess of fly-tipping over the past two years.

And Newry, Mourne and Down and Armagh City, Banbridge and Craigavon Borough Councils are the two areas which witnessed the highest number of incidents of dumping.

There’s scarcely a week goes by that Armagh I does not report on episodes of illegal dumping, including frequent incidents of tyres being abandoned on top of Carrigatuke.

Now the Northern Ireland Environment Agency has revealed the true extent of the problem and the real cost to society.

It says the illegal dumping of waste is the biggest environmental concern for households in Northern Ireland.

The agency revealed that in the last two years it has cleaned-up 306 illegal waste sites, with taxpayers footing the £0.5 million bill.

The highest number of these were in Newry, Mourne and Down – with 65 incidents – and second highest, a further 53 cases, in the Armagh, Banbridge and Craigavon borough.

This compares to a total of just 34 for the whole of Belfast, the biggest of the 11 council areas.

“Fly-tipping is a crime and a grotesque blight on our landscape. In the last two years, NIEA alone, have cleaned-up 306 sites across Northern Ireland at a cost to the taxpayer of over £0.5million. That amount would be significantly higher if we factored in the amount of money each council spends on clean-ups.

“These illegal dumpers are damaging our landscape and turning some of our most precious beauty spots – in cities, towns and the countryside – into rubbish tips.

“It is not an issue we can simply prosecute our way out of. We must inform, educate and motivate people to change their behaviour. To have respect and concern for their prized-landscape and environment – for their own communities, neighbours and our economy.

“We will not hesitate to prosecute when we have enough evidence, but we also need people to get on-board with us to fight the fly-tippers.

“So, we have started a campaign to raise awareness of the issue and to explain that everyone has a responsibility when it comes to how their own rubbish is disposed of.

“Everyone from householders to businesses have a responsibility, a duty of care, to make sure their rubbish doesn’t end up being illegally dumped.

“Whether you hire a skip, pay a builder or a ‘man with a van’ to remove your general household waste you must make sure they are licenced to do so.

“We are working with partners to tackle this problem as clean-up, investigation and prosecution costs are a significant strain on the public purse.

“It is a stain on our beautiful and unique countryside, causes damage to our environment and wildlife, as well as creating a headache for people who live or work nearby with litter, vermin, pollution and smell. In NIEA we are determined to tackle those waste criminals who wilfully dispose of their waste illegally.

“Everyone can help keep Northern Ireland clean and prevent the harm by reporting fly-tipping incidents.”

But he added: “A small number of selfish people are placing a significant burden on our environment and economy.

“We are keen to work with NIEA and local councils to help tackle this problem and develop tangible community pride so that people love where they live and feel responsible for the landscape around them. Our Live Here Love Here campaign is aimed at helping create cleaner and prouder communities and ultimately a better environment for all everyone.

“A high quality environment is something we all benefit from and all organisations, big and small, have an important role to play in helping us all achieve it.”