Gavin’s killer stole all our childhoods: Siblings vow to fight on for justice for darling brother 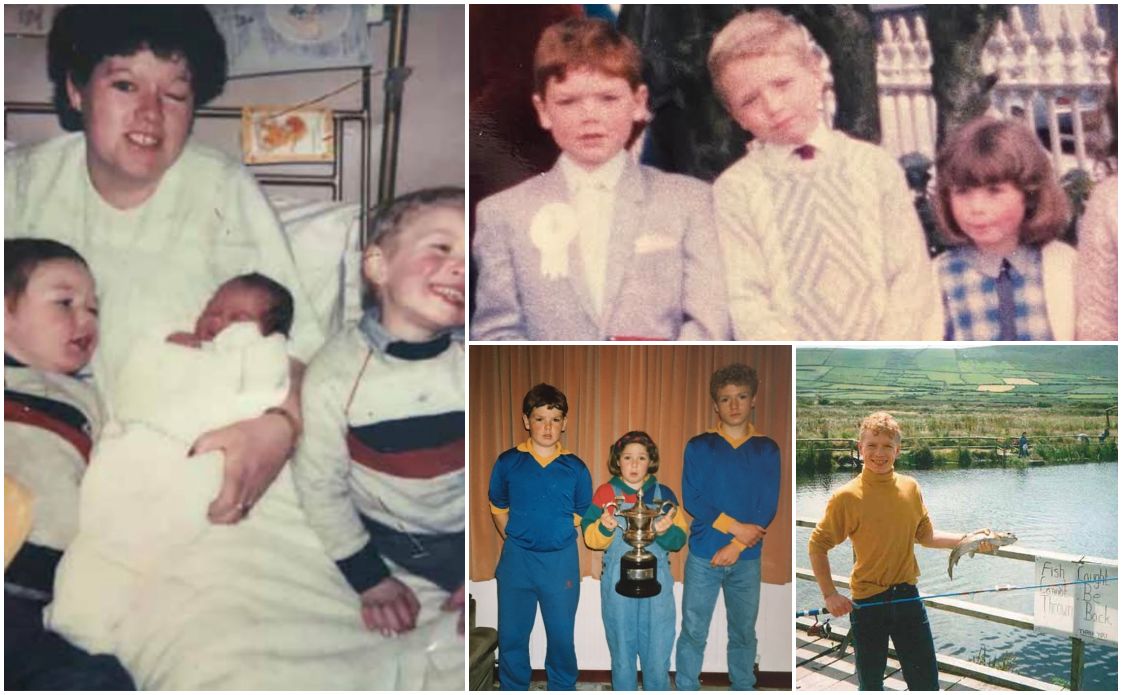 The brother and sister of an innocent 17-year-old boy gunned down in an Armagh taxi rank 27 years ago this week say their fight for truth and justice will continue until the man responsible for his murder is brought to justice.

Keady schoolboy Gavin McShane was murdered on May 18, 1994 – his 17-year-old friend Shane McArdle, from the Markethill area – died a day later in hospital from his injuries – by the loyalist paramilitary group – the Mid-Ulster based Ulster Volunteer Force (UVF).

No one has ever been convicted with these two killings or the attempted murders of those who survived the attack.

In 2019, BBC’s Spotlight on the Troubles named Alan Oliver as “maybe one of Northern Ireland’s most prolific serial killers”. It was alleged the 50-year-old had been involved in the double murder of the schoolboys.

Gavin McShane was the eldest of three children to Matt and Maria. The family – spearheaded by Maria – has fought for justice from that fateful day but in the last two years, due to ill-health, Caionn and Alana – Gavin’s younger brother and sister – have taken over the fight from their parents. This week, Gavin’s story was brought to The Oireachtas in Dublin in a bid to gain support from the Irish government in the hope of adding weight to their campaign for answers and accountability by way of an independent inquiry.

It’s now almost two years since Relatives For Justice – who the family say they are indebted to – published a detailed report about the murders of Gavin and Shane, highlighting multiple deficiencies in terms of the subsequent RUC murder investigation.

Today, Alana and Caionn McShane spoke to Armagh I about how that meeting has given them hope, a flicker at the end of the tunnel, where previously there was darkness.

“It’s a big stepping stone to get in front of the government in the Republic and hopefully it will now re-ignite the case for us,” said Caionn, who believes Gavin’s story will reach corners it had not previously done before.

“At the time, whenever you were speaking to people that lived in the Republic, they were afraid to cross the border because of The Troubles. Maybe in those days, they turned a blind eye to it; they might have heard about Gavin and Shane’s murder but heard about it today and out of their head tomorrow sort of thing. Now that we’ve got in there, we can start pushing on, and hopefully people will start getting behind our story more. “After the meeting on Wednesday, Alana and I had a sense of excitement, because previously we thought that this meeting was going to take place with maybe one or two of the parties, but whenever we heard there was some 26 people on the Zoom meeting from all the parties, we started to get a bit more excited. Maybe there is going to be a crowd that’s going to get behind us and add weight to our fight.”

While political power is being sought, Caionn says the fight for justice is not about politics, but rather a need for answers to the senseless murders of two friends – murders which were a case of wrong place at the wrong time.

“The way Alana, Gavin and I were brought up,” Caionn explained. “We didn’t even know what Catholic or Protestant was.  In our house growing up, it was never political; this is all about the fact our brother was taken from us. “Even after our brother was taken, our mother and father brought me and Alana up telling us it that it wasn’t all Protestants who murdered Gavin, that it was only one man and a certain gang. We are not a political family in any way.”

Maria McShane, who has campaigned tirelessly for her son, lost an eye in the Step Inn bombing in Keady 17 years previously – she was pregnant with Gavin at the time.

“Mummy was in the Step Inn explosion and it was only after Gavin was murdered that we found out that mummy lost her eye in that bomb but she never told us the reason before that,” explained Alana – the youngest of the three siblings.

“She always told us she fell and hurt her eye. It was only after Gavin was murdered and it was reported in the newspapers ‘Miracle baby born to die’ that we started asking questions – why would it be a miracle? It was then we realised mummy was pregnant with Gavin when she was in The Step Inn bomb blast and had survived – and then 17 years later he is killed.” The aftermath of The Step Inn bombing in Keady 1976

Caionn said despite the lingering fog of The Troubles, it is just about getting justice for their brother, someone who meant the world to them, to a lot of people.

“If I was to walk down the street now and kill somebody, I would be in front of a judge within hours, yet here we are 27 years later,” he said. “This man is walking the streets freely, probably without a care in the world – it’s not right.”

Caionn still remembers that horrible day almost 30 years ago, as if it was yesterday. He was just 14 at the time.

“The minute I was told what had happened my brother, I had to grow up to be like a 41-year-old; I lost my childhood that day because I had to help my family through it. I lost the whole lot. But if anyone tells me I was only a child and I’d forget, that’s a load of nonsense.”

Alana said the day Gavin was murdered “we practically lost three family members that day” for “he might as well have shot mummy and daddy too”.

She added: “We lost our parents and at the end of the day our lives are about getting justice for Gavin. We didn’t do as much stuff as a family as our family was not complete anymore.”

Instead of a feeling of rejection, of bitterness, there was a great understanding of responsibility from the youngsters at the time – Alana was 12. They had to grow up very quickly.

That responsibility has evolved from supporting their parents to leading the charge for justice on their behalf.

“We never thought we’d be sitting here 27 years later without justice or any truth about what had happened,” said Alana.

Caionn added: “The feelings remain exactly the same as they did that day. To this day I feel like I have only been told two hours ago that my brother was killed. The hurt never goes away; if anything it gets worse.

“Whenever you’re fighting for justice, all the photos from back then, the coffin down the main Keady street, all that there gets brought up time and time again.

“If somebody dies, you sort of try and put it to the back of your head and get on with your life but in this instance it’s there all the time. We are trying to push on with this fight but all that paperwork is still on the table all the time – you’re reliving that memory every day. But you have to fight to get the man responsible behind bars.”

As the years roll by, from the outside looking in, there’s a visceral pain that is often overlooked. Weary is the head that wears the crown and in Alana and Caionn’s case, weary are those who carry the burden. Maria McShane shared her story, and brought her fight for justice to former US President Bill Clinton and wife Hilary

Said Alana: “There are people there who would say ‘would you just not give up? It’s not going to happen’. But that’s alright for them to say, they’re not sitting in our shoes. If they were in our situation, would they just give up?

“Gavin went to school and came home in a coffin. He didn’t do anything wrong in his life so why should we give up on him? We’re entitled to truth and justice for Gavin.

“Time might have helped heal the wounds if we had received justice whenever it happened but you can’t heal if you don’t have answers.

“And those answers have been locked away; the evidence destroyed.”

Remembering their time they did have together as family, Alana recalls: “We were like the three amigos. We had céilís in the house. Gavin played the bodhran, Caionn the banjo and I was on the flute and our house was such a happy house, the craic was ninety. “At Christmas all the instruments were brought out but after that myself and Caionn, we couldn’t play anymore because there was one person missing in our wee céilí.”

A silence fell over the home – they had lost a part of themselves. For Caionn, he too lost a brother, a best friend with whom he played sports every day.

“Me and him would go out everyday to hurling,” he said. “After he died, I was walking out the door, it was like not taking your hurl with you, or kit bag, because you were leaving on your own – it was strange times.”

Alana described Gavin as “the happiest go-lucky person you could ever had met; he was full of life”.

“When he and Caionn were playing the Féile all over Ireland, every town we went to – and still to this day – the people always remember Gavin McShane. He was the life and soul of the party – he touched so many hearts across Ireland. We’re still meeting people when we’re away with the club talking about him.”

For Caionn and Alana, Gavin’s memory will never fade, nor will their fight for truth and justice.

“We are entitled to the truth,” said Caionn. “Who was behind Gavin’s killer? Going to The Oireachtas has given us hope, the light at the end of the tunnel wasn’t there but after this meeting there is a flicker again. “The more we get the report into Gavin’s murder out there, whenever it’s read, it pulls on the heartstrings. If anyone who can help doesn’t, turns their back on helping, it’ll be a shame on their behalf.”

In concluding, Caionn added: “Mummy has said, for the past 27 years, that the man who took Gavin’s life, she was always going to be a thorn in his side and that she’s coming to get you – and we’re not stopping until we do get you.”