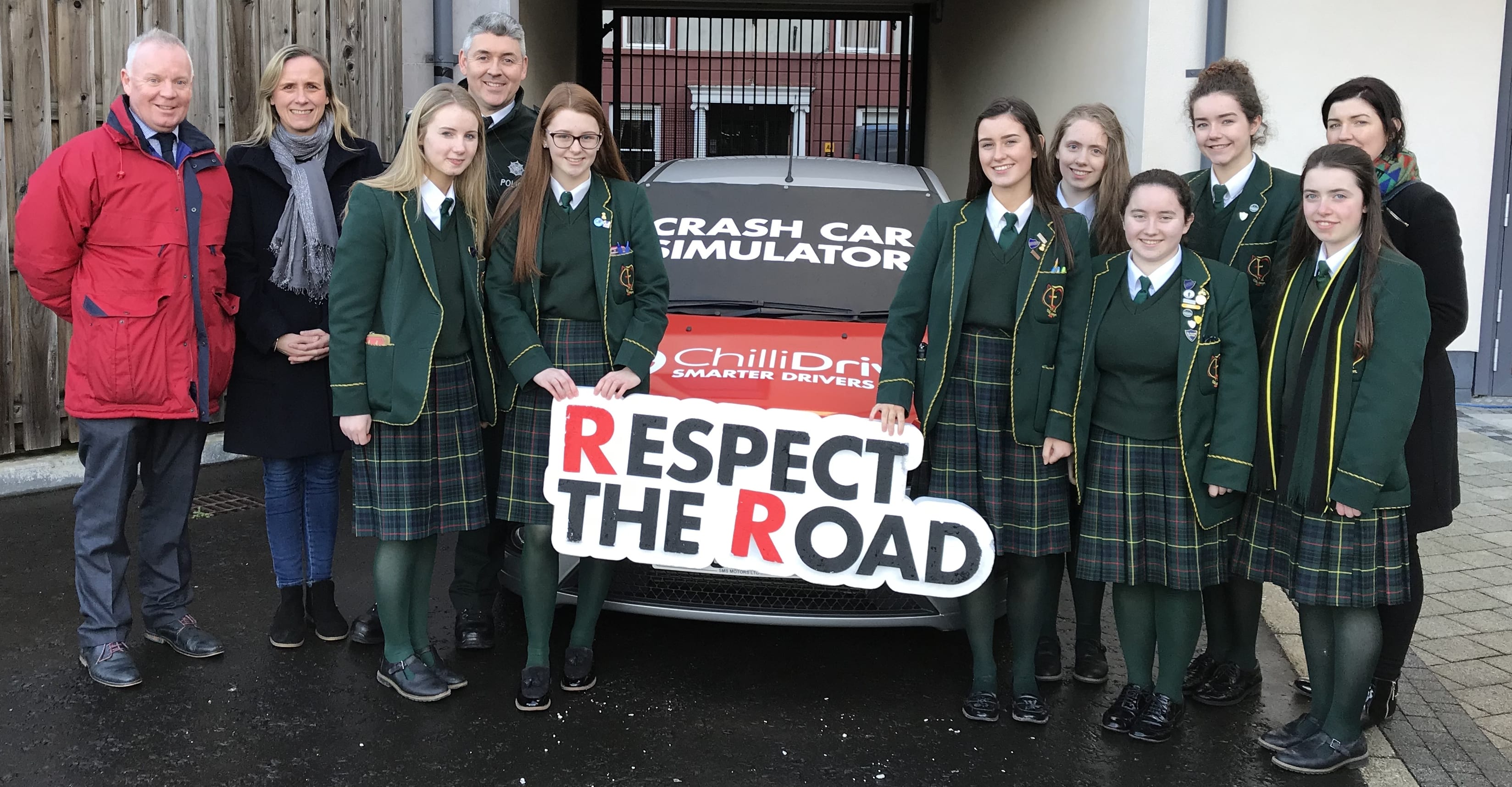 The PSNI, An Garda Síochána and the Northern Ireland Fire and Rescue Service were on hand to deliver gripping presentations and demonstrations to over 70 pupils from five schools from Armagh and five from Cavan, Louth and Monaghan.

PSNI Officer Kieran Quinn had a clear message to those in attendance: “Speeding and inattentive driving seems to be the main causation for road traffic incidents. Slow down, take time and if you’re in a vehicle don’t be afraid to shout out the message ‘slow down’ if the car is going too fast.”

This event was a key opportunity for Autoline to exhibit their state-of- the-art car crash simulator which to date has reached over 25,000 pupils in schools and colleges as part of their wider ‘Respect the Road’ awareness campaign.

The simulator is a specially equipped Ford Focus ST that has been adapted to include in-car screens, speakers, smoke machines and bespoke hydraulics.

The vehicle is used to recreate a real life fatal incident that led to a 17-year-old driver being sentenced to prison.

Colm O’Hare of the North South Ministerial Council Joint Secretariat said: “The combination of hard-hitting presentations, practical advice and educational activities around policy and future planning makes this an all-encompassing road safety event for these pupils.

“The topic of road safety is nothing new but with collaborative and creative approaches to educating young road users, it is our hope that in years to come there will be significantly fewer deaths and injuries reported on our roads.”

In recent years, there has been a significant focus on increasing road safety awareness and reducing fatalities on our roads, both North and South. This has had a positive impact as authorities on both sides of the border have been able to report a reduction in road user deaths in 2017 compared to the same period in 2016.

The PSNI recently announced a 7% reduction in road deaths with a total of 63 in 2017 and in their end of year statistics, the Road Safety Authority reported that 158 people lost their lives on roads in Ireland last year, which signified a 15% drop from the 186 lives lost in 2016.

PSNI statistics for the the Armagh City, Banbridge &amp; Craigavon Council area show a 40% decrease in road deaths in 2017 compared to the previous year. There were 6 fatalities, 3 of which were people under 25 years old.

Suzanne Curtis, Autoline Insurance Group’s Marketing Manager, said: “With our ‘Respect the Road’ campaign we are trying to reach as many young drivers as possible so that we can educate them on the dangers faced on our roads and to put in place a mentality of awareness and responsibility that will stand by them for years to come.

“While we are happy the statistics show a decline in road deaths in 2017 both north and south of the border, we see any death as one too many and we hope our work in the area of road safety, particularly with young drivers, can help reduce these statistics even further.”

In addition to the ‘Respect the Road’ campaign Autoline has also developed ‘ChilliDrive’. The young driver app measures drivers’ skills and rewards safer drivers with lower premiums and is available to young drivers in Northern Ireland. The app can analyse data for trips made in NI, the UK and in Ireland.

For further information about how your school or organisation can participate in the ‘Respect the Road’ programme, please contact Evanna Kieran at Autoline Insurance Group on 028 302 59011.