Former Monaghan seeks public support to help him on his way 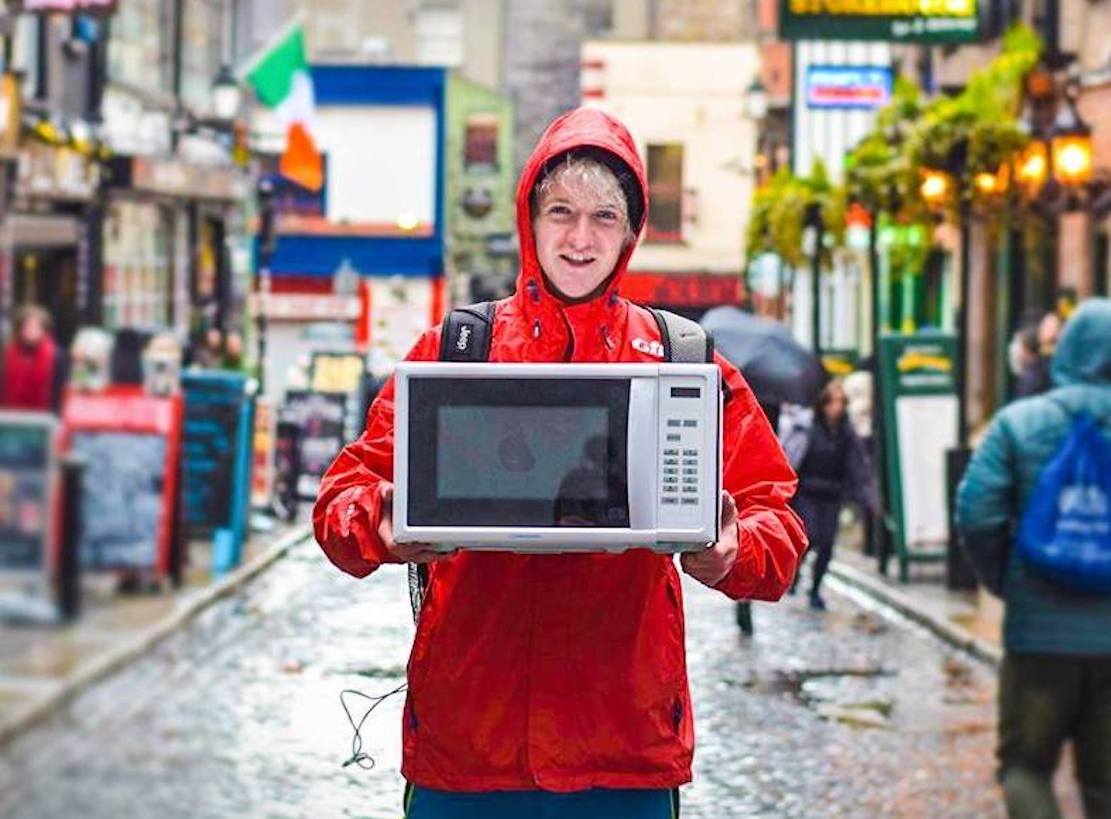 Diarmuid and his microwave will be passing through Armagh, en route from Monaghan, early next week.

A Dublin-based student union officer is appealing for local people to help as he prepares to arrive in Armagh as part of a 32-county hitch-hike to raise money for charity.

Diarmuid McCleary, who is originally from Monaghan, is hoping to raise €2,000 for the charity Jigsaw, which provides counselling and support for young people and their mental health.

But he will make the journey without neither a single cent nor penny – and clutching an unusual piece of luggage!!

Diarmuid, a 26-year-old student officer at the Dublin Institute of Technology, will embark on his journey this Friday, April 6.

If all goes according to plan, he is aiming to pass through Armagh early next week but needs help from local people in order to achieve his goal.

Diarmuid told Armagh I : “I’m going to attempt to hitch-hike to every county in Ireland with no money while carrying a microwave.

“I will be relying on the kindness of strangers and generosity of local businesses and people to help me make it.

“I won’t have any money or a place to stay.

“I will be starting my hitch-hike in Ballinsaloe in Galway and heading on a zig zag across Ireland.”

On Monday, he hopes to make it from his home town of Monaghan to Armagh and is putting out the call for people to assist him.

The quirky fundraiser – under the Umbrella of The Microwave Express – will benefit Jigsaw and you can read about the great things which the charity does here: https://www.jigsaw.ie/what-we-do/what-we-do/

For Diarmuid, it is just the latest in a string of fundraisers he has undertaken, and the more unusual the better, he insists!

“I organise lots of fundraisers, like abseiling off Croke Park, skydiving, charity handcuffs and other various weird and whacky things as a student leader,” he explained.

“The microwave hitch-hike is an idea I have had for years and now I feel confident enough that it might be possible.

“I went to an event last year in the Nevada Desert, called Burning Man, where I saw loads of wonderful and truly amazing things and it motivated me to try to do stuff outside my comfort zone.”

Diarmuid says he chose the charity as it was one selected by students at DIT and one which “does great work with young people and their mental health”.

He has goals in sight in terms of fundraising and itinerary but it really is very much in the lap of the gods – and the public!

“I expect this to take around 11 to 15 days in total, it really depends on the distance I can cover each day,” adds Diarmuid.

“Hitch-hiking can be tricky, people might not stop if they see a random guy in a high vis with a microwave!

“If they know this is a charity event they might be more inclined.

“I’m hoping to cover three or four counties a day and I’m really relying on social media and news media to help me get around.”

But the question we are dying for an answer to is: ‘Why a microwave?’

“Why not a microwave?” he responds. “Honestly, I thought it would be a good way to generate awareness about my hitch-hike. I chose a kitchen appliance as inspiration from a book by a guy named Tony Hawke. Back in 1999 he hitch-hiked around Ireland with a fridge and my trip is inspired by that!”

To help Diarmuid support the charity to support others, he is asking donations and food and shelter along the way.

“If you would like to help me please donate,” he added. “People in Armagh can help by offering a lift, some food, liking my page ‘The Microwave Express’ or by donating to the my online fundraiser https://www.gofundme.com/TheMicrowaveExpress

“If you have somewhere to stay or have friends who could help me, please get in touch.”