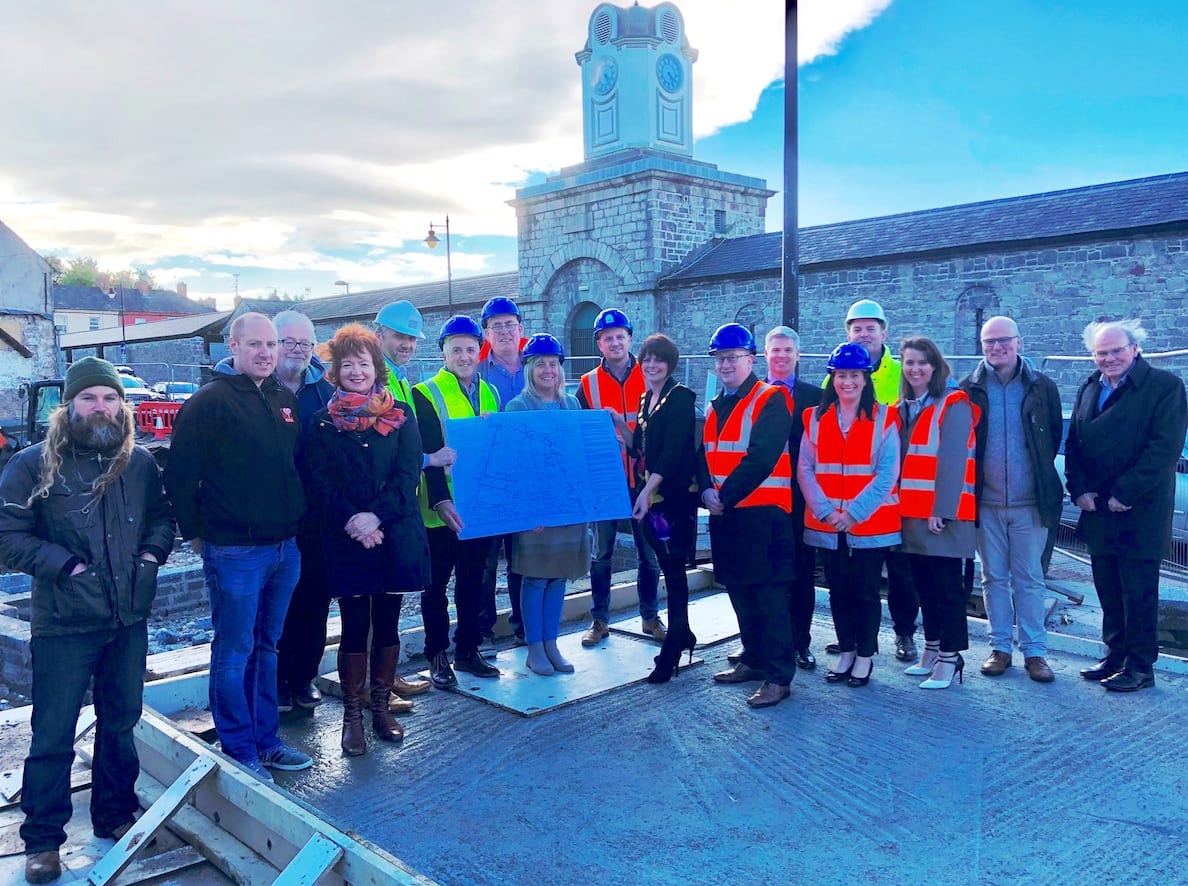 Construction at the eagerly anticipated Irish language and cultural hub at the junction of Upper English Street and Dawson Street at the Shambles, Armagh City is finally underway.

The £2 million capital project is the largest of its kind to be undertaken by a community-led consortium in the historic city centre and is expected to be completed by July 2019.

Following a number of minor delays in order to address concerns around site contamination and adjacent services and utilities, excavation and ground works at the site are finally nearing completion.

‘Aonach Mhacha’ – ‘The Assembly of Macha’ – is a cultural enterprise initiative borne out of years of local community development and is led by a cooperative of Irish language organisations.

The mission for the new centre is to be an Irish language-led, cultural hub with diverse community support serving all the cultural traditions of Armagh City and surrounding areas.

In 2015, the company entered into negotiations with Armagh City & District Council to acquire the site for redevelopment.

An integrated consultancy team led by DA Architects and Smyth Surveying was appointed to design a fit-for-purpose new-build to meet the needs of the Aonach Mhacha team.

After a public procurement process, Brendan Loughran & Sons Ltd was selected as the preferred construction firm to carry out demolition of the old fire station and construction of the new centre.

Aonach Mhacha will be a landmark arts, language and cultural enterprise facility [cultúrlann] in mid-Ulster and the border region.

No such centre, or similar, currently exists in Armagh City and the initiative is based on two similar, successful cultural enterprise models that currently operate from urban locations in Belfast and in Derry City.

When completed next year, the ‘cultúrlann’ will provide offices for a number of well-established Irish language agencies based in the city.

There will be dedicated space for performances, conferences, classrooms, meeting rooms and galleries. There will also be exhibition space, a media suite, craft workshops, social economy incubation units, a family support centre and a gift shop.

Aonach Mhacha Director and Project Sponsor, Gearóid Ó Machail expressed his satisfaction that construction was finally under way at the site: “The Aonach Mhacha cultúrlann project has been almost ten years in gestation.

“The local community has shown great patience, support and understanding while a series of challenges and obstacles have been gradually overcome in reaching this point.

“During many visits to local schools, cultural groups and businesses in the area, I have detected a rising sense of anticipation and there is palpable excitement in the air, now that people can see evidence of progress on the construction side of things.”

He added: “Aonach Mhacha will be engaging further with other cultural agencies, community groups and individuals in order to best shape the services and the cultural offering within the new building to the needs of the local community.

“We shall endeavour to keep people fully informed throughout this capital development phase and my offices are always open to anyone seeking further information about the project and our company.”

“Gael Linn is delighted to have been involved with the innovative Aonach Mhacha vision from its very inception,” said Mr Ó Ciaráin.

“Gael Linn has been in Armagh City since the mid-1950s and we look forward to taking up our new office space and also to playing our part in the thriving activity which is planned for Aonach Mhacha.

“Gael Linn congratulates the Aonach Mhacha Directors for making their ground-breaking plans a reality and for guiding the construction project to its current stage. Ní neart go cur le chéile – There is strength in unity!”

Róise Ní Bhaoill, representative of the cross-community, Irish language advocacy group, the Ultach Trust/Iontaobhas Ultach added: “The ULTACH Trust is delighted to have supported and been involved with Aonach Mhacha from the start.

“This landmark project in the heart of Armagh City is a testament to the commitment of a dedicated group of people and will serve as a practical and creative resource for all the people of the area.

“The synergy created by the clustering of Irish language groups and the planned cultural programmes will enhance and boost Armagh’s vibrant cultural scene”.

Caoimhín Mac Giolla Mhín, Director of Ciste Infheistíochta Gaeilge, the Irish language Capital Investment Fund secured by Gerry Adams at the Hillsborough Peace Talks 2010, said: “Ciste, are proud to have been the first major funder to endorse and fund the Aonach Mhaca concept working closely with the client for more than five years, in search of different potential sites.

“Whilst our commitment initially started out with £300,000 from our limited funding pot, the subsequent central involvement of DCAL Minister Caral Ní Chuilin and her Department resulted in the project becoming much bigger and more iconic in nature,” said Caoimhín.

“The Ciste Board was inspired by the opportunity of becoming a close partner with Caral and her professional team and decided on elevating Aonach Mhaca project to Regional Flagship Status. The Board especially were excited with its new strategic central location in the heart of Armagh, it eventually agreed to contribute our biggest ever grant of £600,000 to this game changing Irish language project, added Caoimhín.

“We would like to congratulate and thank Aonach Mhaca board and team for all their efforts by successfully putting Armagh’s Cultúrlann on the map,” Caoimhín concluded.