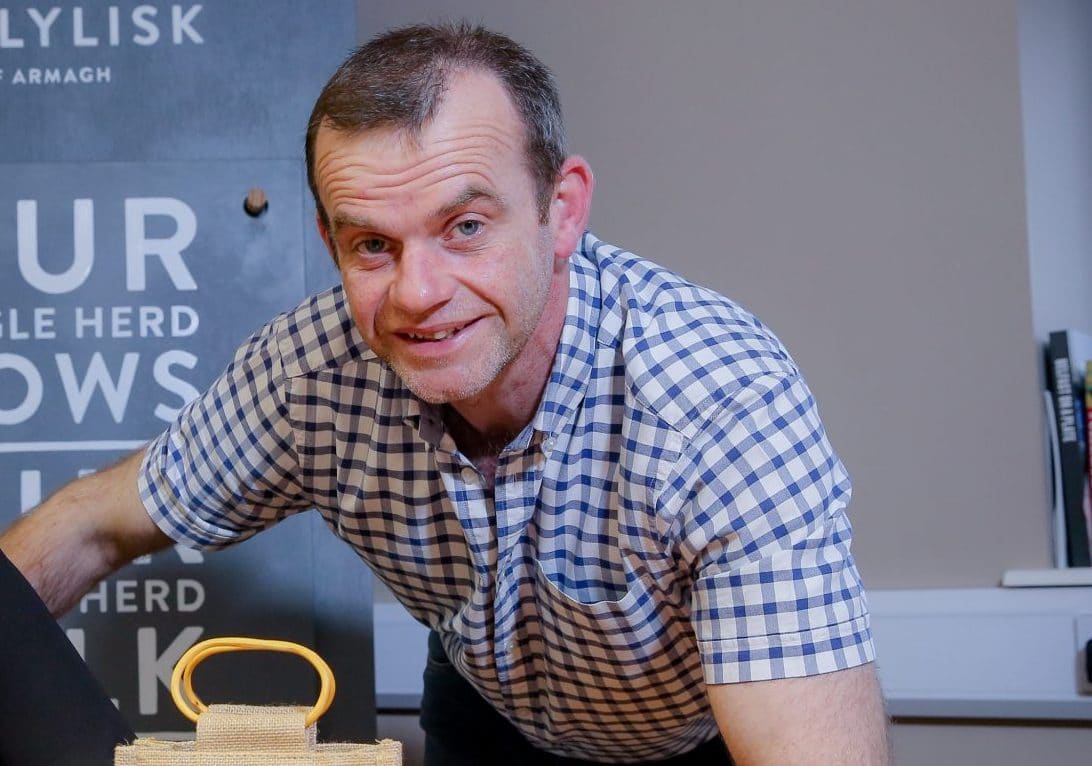 County Armagh has been left reeling after the sudden death of Dean Wright, the hugely popular owner of the award-winning Ballylisk of Armagh.

The esteemed and innovative entrepreneur was a giant within the Northern Ireland food industry and his loss will come as a huge shock to all who knew him.

Just weeks ago, in one of his last interviews, Dean spoke to Armagh I about his plans for 2021 and for the business – which involved reducing its carbon footprint – which he described as the “ethos of Ballylisk”.

Police earlier confirmed they attended the sudden death in the Brackagh Road area of Portadown on Saturday morning.

Five generations of Dean’s family have farmed at Ballylisk for the past 200 years.

Dad Jim operated a mixed farm with cattle, sheep and crops and Dean began working with his father in 2006.

But it was not until six years ago that he took his interest in cheese-making to a new level with the invaluable help of Loughry College.

Ballylisk Dairies Ltd has won many awards over the years and Dean has picked up many for his cheese products including recognition at the Great Taste Awards.

The company has always prided itself on its farm to fork methods with everything produced by the Wright family operation under the umbrella of ‘Ballylisk of Armagh’.

Dean, speaking to Armagh I in October, explained: “This morning’s milk from the cow will be cooled at the farm, then transferred and pasteurized before beginning the cheese making process within six hours.”

Sorry to hear about the sudden death of Dean Wright ⁦@ballyliskarmagh⁩. Talented maker of great cheese. He’ll be missed by all who had privilege to know him ⁦@Food_NI⁩ pic.twitter.com/uWeSReCT7t

Last year, when the Covid-19 pandemic hit, an innovative Dean began to diversify even more to the changing times and methods to ensure business continued. He did so with a milk delivery service and invited other artisan food producers on board too, helping local businesses who were struggling by including them in the doorstep delivery programme too.

The popular Co Armagh man was also dealing with changes regarding Brexit.

Again speaking to Armagh I just last month, he told us how Ballylisk had taken up the mantle as the only local producer of brie. He had just confirmed he was to supply brie to supermarkets on both sides of the border and other parts of the UK.

Dean, whose business has been working to produce a low carbon footprint, considered Brexit a “potential opportunity for local producers” and said the arrival of changes came as no surprise to anyone.

He said: “We are actually trading well into mainland UK. Our distribution channels are fully intact and reasonably seamless at this point in time.

“I think we were all well prepared. This came as no shock to us. We all knew exactly what it entailed to go from A to B. It’s not as if we weren’t warned about what we needed to do. It’s maybe hard for me to speak about the troubles and turbulence that’s out there because we’re not experiencing any.

“There’s opportunities. Cheese coming in from mainland Europe, there’s a big delay in that type of thing. I do believe the retailers and all these organisations are looking more locally and this could maybe feed in well with the pandemic we’re in about shopping locally.

“There’s loads of ways to look at this but yes, by all means, there are opportunities at home here which is fairly low-hanging fruit which we should be looking after.”

Tributes are being paid to Dean via social media with one describing him as “an absolute gent” and another remembering him as “a good friend and a great supporter of his local community”.

To Dean’s family and friends, we send our heartfelt sympathy at this time.