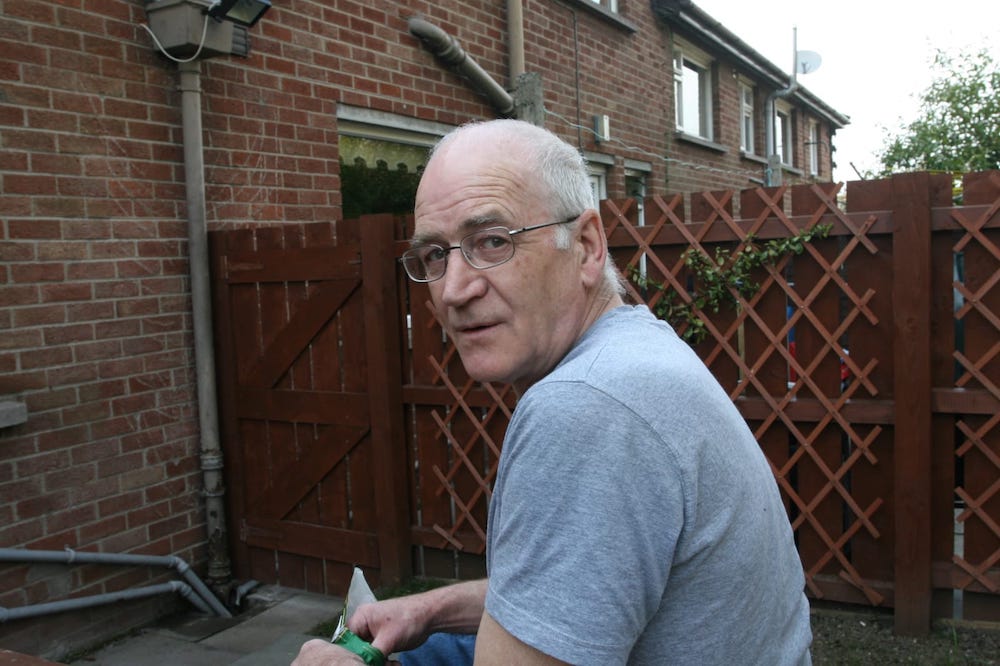 Two chapters of the one life – an English engineer who went from working on the Superconducting Super Collider in Texas to enriching the lives of the children of an Armagh city estate.

This may sound fanciful but this was the path of Jim Lobb, a name which will be familiar to two generations of children from Gough Avenue.

Armagh I came across this story after receiving an email from the City of Armagh High School with regards to a posthumous donation of equipment from Jim, via his son Matthew.

Jim passed away on January 20 from lung cancer and Covid, leaving in his wake a legacy which his son Matthew was not fully aware of until he came to care for his father in his final months.

Speaking to Armagh I, Jim’s son gave an outline of his father’s life prior to reaching this island 25 years ago, the chapter with which he was more acquainted.

Born in 1942, the third of three brothers, Jim grew up in a leafy suburban village in Surrey and enjoyed tinkering about in his spare time.

Matt said: “He loved mechanics, loved engineering and there was always bits of old cars at the front of the house that he was taking apart and rebuilding.”

After completing his O-Levels at Therfield School in Leatherhead in Surrey, as head boy no less, Jim went on to an apprenticeship with an aero-engineering firm.

Jim began a degree in mechanical engineering but after tiring of study he left to return to work.

Then in 1964, the young man jumped at the chance to explore the world and left for Australia on the £10 scheme.

Matt explained: “This was for fit and able-bodied people to go to Australia to work. Whilst he was there he worked at a fun fair in Melbourne and also at the Assay office, which I think was weighing up gold.”

After 18 months the adventure was over; Jim returned by boat, being reunited with his bride-to-be Allison in Paris. They marred in 1966 before having two children, Matthew and Catherine.

Matt said: “He settled back in Surrey, he worked on turbines for the British Oxygen Company in London. This work took him to Finland, Edinburgh and CERN in Switzerland.

“There is a copy of his engine knocking about at the London Science Museum. What he did was revolutionary, he worked in cryogenics, not the freezing of heads you find in novels, but the liquifying of gases for use by university research departments.”

He added: “He was an extremely talented engineer. He did not just design but he tweaked and built and was involved in the whole process.”

Notable creations by Jim outside of work included: hovercrafts powered by vacuum cleaner and lawnmower engines; a pogo stick with an engine; and an air gun (more of a cannon by Matt’s own admission!) which fired one inch bullets of plasticine wrapped in tin foil.

Matt commented: “He just loved making these thing for the adventure of it all, just because he could.”

In 1992, he left the family home and moved to Texas USA to work on the Superconducting Super Collider (SSC), a particle accelerator which, had it been completed, would have dwarfed the Large Hadron Collider in Switzerland.

“It was to be more than twice the size of that in CERN and my father was there working on designs for cooling the magnets,” Matt explained.

However, in 1993 the project fell through, Jim travelled around the UK looking for somewhere to settle and to many people’s surprise fixed upon Northern Ireland.

Matt said: “He had no connection to the place and didn’t know anyone from there.”

“This was before the Good Friday Agreement and there was suspicion of this 5ft 11 Englishman, people wondering what this man was doing here. He received threats and his windows were broken in the early days.

“But over 25 years he won over the people of Gough Avenue. He had opened his house up to the local children and provided computers and musical instruments for their education.

“This was a place where they could draw, complete puzzles, play games, learn computing and be inspired. Schools remarked on the children’s computer knowledge at a time when home computers were a rarity on Gough Avenue.”

And so it was that this Englishman adopted Armagh as his home, with ‘Jim’s house’ becoming an unofficial youth club or meeting centre for the kids of Gough Avenue for over two decades.

Matt said: “His door was always open, he wanted to inspire their curiosity. The kids were rather wary of him at first, which is understandable, but he just wanted to do something good for the world.

“It is remarkable these days that he didn’t want acknowledgement for his efforts, or the need for reciprocation.”

Jim had a philosophy about the value of quietly helping others and the possible, unforeseen consequences this help might have. Only in the last few months, Matt found out how deeply held that philosophy was.

He said: “He had helped launch a number of ventures within Northern Ireland which I know about and there are probably an equal number I will never know about.

“Gough Avenue had its first university student, and he attributed his achievement to my father. Whether that is true or not we will never know but I have been told by others that their grown children have qualifications and careers because of Jim’s help.”

When it came to organising his father’s funeral, Matt said he would have wanted people to come together so he invited those who knew Jim to write or record messages. About 40 people contributed to the service.

“He never told his Northern Irish friends about what he had done in England and vice versa. It is like he had two chapters of his life and no one person understood them both.”

“I was aware he had helped the children of Northern Ireland. I had not realised how influential he was or how Gough Avenue had taken him to their hearts. It is a wonderful he made such an incredible difference and how loved he was by Gough Avenue.”

One Gough Avenue resident told Armagh I: “Jim was the most generous man you could ever have met, and when I say that I mean it. He made the childhood of every child in Gough Avenue so much more pleasant and fun.”