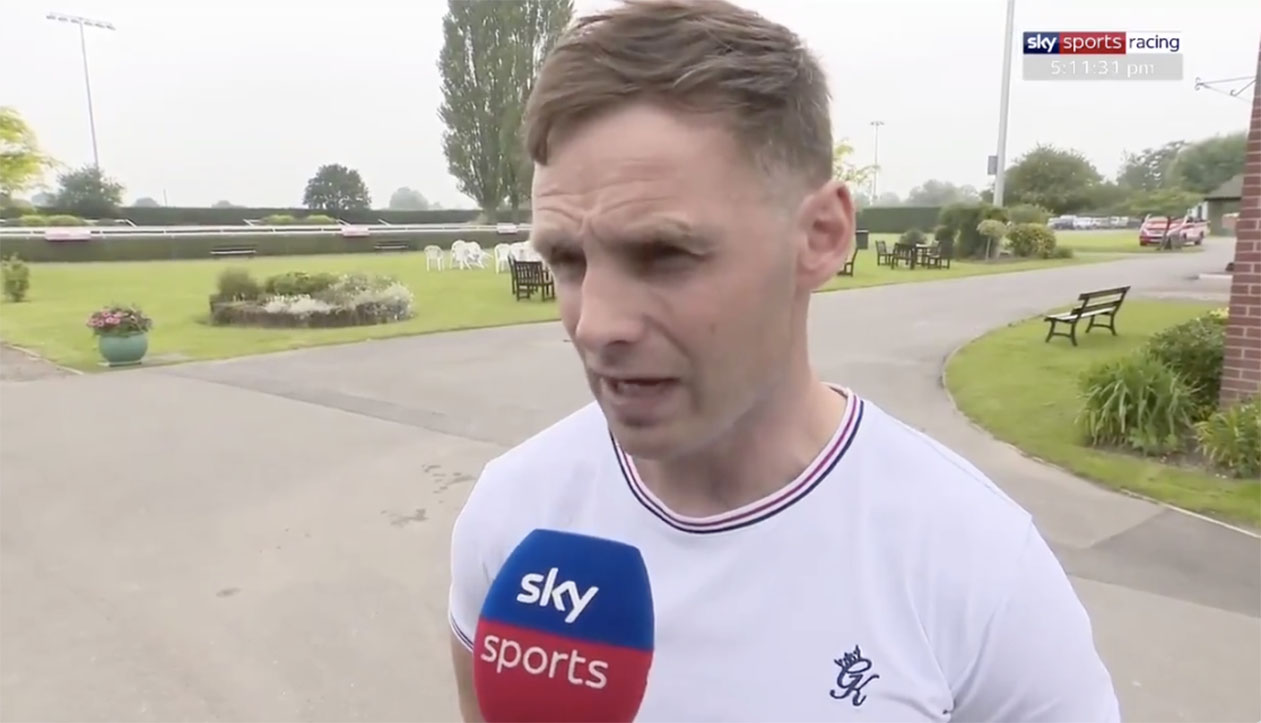 An Armagh trainer said he “felt like a criminal” after his horse won a race at Southwell racecourse in England on Monday afternoon.

Ronan McNally was speaking to Sky Sports Racing about being called in by the race stewards on three occasions following the win.

Mr McNally’s horse, The Jam Man, won the 2:45 three-mile novices’ handicap chase, but had been as far out as 20-1 the day before.

However, it returned the winner as the 9/4 favourite, which aroused suspicions with the stewards.

“To be honest, I feel like a criminal today – coming over here, I’m in with the stewards three times,” McNally told Sky Sports Racing.

“My eight-year-old son is here with me – it’s a family thing, I don’t need to be called in numerous times, asking questions about this and that.

“All this ‘big gamble’, it’s a bit of a laugh. (People) putting on Twitter this morning about tipping up The Jam Man – the whole thing snowballed. I think it’s all blown out of proportion.”

He added: “[The stewards] had a word with me in the parade ring after – then I was called in again to see why the horse suddenly had won, ‘was it the change of tactics?'” added McNally.

“I said ‘No, there was no change of tactics – he won because my horses are finally healthy, he’s the best horse in the race’.

“My horses, for seven months, have been out of form. I brought a horse in and it got the yard sick. I haven’t had a placed horse in seven months, not to mind a winner.

“Two weeks ago there, The Jam Man ran and had a third and fourth. Finally, I knew then that the horses were starting to come back. I said then, ‘Right, we’re going to Southwell, he’s won there before. He’s won in England but not Ireland’.”

A forthright Ronan McNally spoke to @LeglockLuke after The Jam Man landed a gamble at @Southwell_Races earlier this afternoon… pic.twitter.com/AmFKeHPgE5

In the stewards’ report, the BHA posted the following information: “Prior to this race, at the request of the head office of the British Horseracing Authority’s integrity department, the stewards spoke with Ronan MP McNally, the trainer of THE JAM MAN (IRE), and Aidan Coleman, the rider.

“They were interviewed to provide information regarding the selection of this race for THE JAM MAN (IRE); their expectations for today; and the riding instructions given. Their explanations were noted.

“The winner, THE JAM MAN (IRE), appeared to show improved form, compared with its previous run at Downpatrick on 15 June 2019, where the gelding finished seventh of nine, beaten by 98 lengths.

“Ronan MP McNally’s explanation that the yard is coming back into form, the gelding had worked well at home prior to arrival in England, and THE JAM MAN (IRE) appears to run well at Southwell was noted. THE JAM MAN (IRE) was routine tested.”