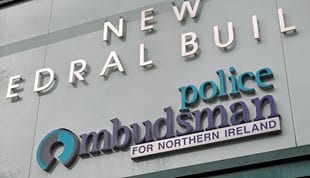 A man’ who had claimed that a police officer struck him in the ribs after spraying him in the face with CS Spray during an alleged sectarian incident have been rejected following a Police Ombudsman investigation.

The man claimed an officer called him by name and without provocation sprayed him in the face during an incident in Armagh city in July.

The man said he retreated around a nearby corner to get water for his eyes, but was followed by the officer who then kneed him in the ribs and told bystanders not to provide any assistance.

He said the officer was among a group of about 10 police officers in the area at the time, and claimed some of the others said there had been no need for their colleague to act in that way.

He also alleged that the officer had been motivated by sectarianism, as he had previously acted in a sectarian manner towards him.

A Police Ombudsman investigator checked relevant police records, which revealed that eight police officers had been in the area dealing with an unrelated issue at about the time stated by the complainant.

Officer named by complainant was off-duty at the time of the alleged incident.

They did not include the officer he accused of assaulting him, who was found to have been off duty at the time.

Notebooks belonging to all eight officers were examined, and none contained any reference to the complainant or the use of CS Spray.

The CS Spray canister registered to the officer identified by the complainant was weighed, and this showed it had not been used.

The investigator also noted that the complainant had failed to produce mobile phone video footage of the alleged incident, which he had earlier suggested was available.

Given the lack of evidence to substantiate the complaint, the investigator rejected the man’s claims and closed the case as unsubstantiated.

Pensioner tied up by his feet as suspected gunmen ransacked house